WWF: Shipping emissions tax worth $10bn a year to the Green Climate Fund

A global levy on shipping emissions could be worth at least $10bn a year to the Green Climate Fund (GCF), according to WWF.

Talks on a financial mechanism to incentivise reductions in emissions from the industry are ongoing through the UN’s International Maritime Organization (IMO) but the latest progress has seen an outline of how a potential system could operate.

A levy placed on all ships would be collected from shipping companies, with the US pressing for this to be linked to fuel consumption. In order to compensate developing economies, their governments would then receive a rebate, taken from the collected revenue. 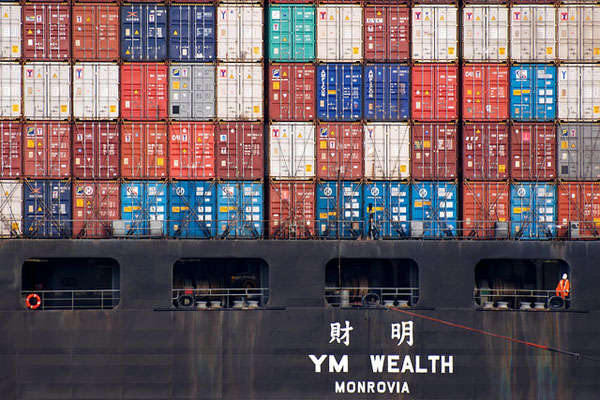 Shipping could raise as much as $10bn a year for the Green Climate Fund. (Source: Flickr/IngridTaylar)

The GCF is the centrepiece of the UN’s climate finance plans with a goal to raise $100bn a year by 2020. Levies on shipping and aviation emissions have been touted as a key source of finance for the fund since its inception.

“The money should be used for in-sector activities to improve research, efficiency and capacity building to reduce shipping emissions further,” said Mark Lutes, Policy Coordinator at the WWF Global Climate and Energy Initiative who follows the IMO talks closely.

“The money that is left, which could be substantial, it could be tens of billions of dollars, at least $10bn, should go to climate finance ideally through the GCF,” Lutes told RTCC.

Before any of this money is issued however, Lutes says the governments of developing countries must first be compensated to ensure that the UN climate change agency’s principal of Common But Differentiated Responsibility (CBDR) is met. This ensures that major emitting, wealthy economies take a heavier share of the burden.

The levy cannot be selectively applied to ships from specific countries as they can simply “re-flag” under a different state in order avoid the charges.

Lutes said the rebate is likely to be linked to the value of a country’s imports so that those consuming the fewest goods are affected least by the levy.

Issuing the levy directly through national governments is also a non-starter.

“The money from the global shipping industry should be handled internationally. If it goes into national treasuries we’ll never see it again, it will disappear into national budgets,” said Lutes.

The IMO talks on a potential mechanism are held roughly every eight months with the next meeting scheduled for April 2013.