The most common criticism of the UN climate change negotiations is the sometimes glacial pace.

From the outside it can seem inexplicably slow. When you strip away the politics, the complexity of the scientific and technical detail in the talks you are left with 195 groups of people representing 195 countries (and the EU) trying to make a decision that every single last one must agree to.

How long does it take you and a group of friends to choose a restaurant or your family to decide where to go on holiday? If your family had 195 members, like the UNFCCC does, I dare say it would take a little longer.

The consultancy PricewaterhouseCoopers (PwC) brought the issue of consensus at the talks into the spotlight during an event in London last night. 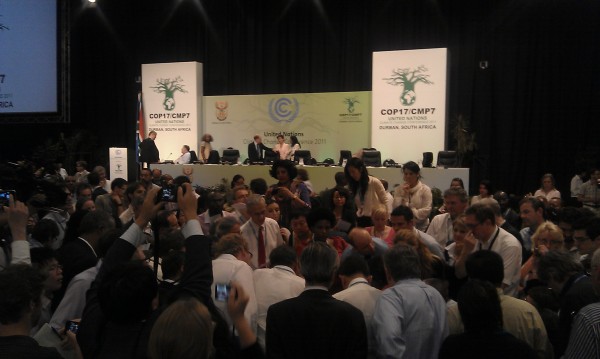 A last minute “huddle” was credited with the consensus at last year’s talks in Durban but how inclusive was last minute settlement? (Source: Ed King)

Decisions at the talks are negotiated intensely and then passed by consensus. This means every single one of the 195 Parties must be satisfied.

Any objection has three outcomes; the decision is blocked and everyone goes back to the drawing board, the dissenting voice gets a desired concession or the chair of the talks can decide to put the issue to a vote where a majority of nations is sufficient.

When Bolivia objected to the Cancun Agreement in 2010, it was the threat of a vote, and the country’s then probable isolation, that made it back down and allow the document to pass.

But if voting was more common place, as it is at the EU for example, would it enable faster, more efficient progress or allow minority voices to be drowned out?

The current situation means minorities can block the will of the majority, is that really a better situation?

Consensus is not always a good thing. The Rio+20 Summit on sustainable development in June witnessed a race to the lowest common denominator with a weak agreement being the only one where consensus could be found. Faced with the embarrassment of no settlement being reached, the Brazilian Government set the bar low.

If voting were to take the EU model of “qualified majority voting” whereby the larger countries’ votes are given a weighting, what parameter would be used to determine that weighting?

The countries with the most emissions to reduce could be given a bigger say in how that is achieved, but with the most to lose economically, that would risk embeding low ambition.

The most vulnerable could be given the greatest say to reflect the grave threats that they have described as “existential” and “life or death” issues.

Voting would prevent so-called spoiler nations from throwing a spanner in the works to slow things down, but it would also create the possibility for marginalisation. For a process already lacking trust and goodwill, that could be highly damaging.

Jose Garibaldi, who advises several Latin American delegations has called for “coalitions of the ambitious” to form. With enough support these groups can leave the big players, such as China, left with little option but to cooperate. Garabaldi told the audience at the PwC event that this was the lever that made China budge at the Copenhagen summit and it can work again.

Consensus sounds like a very virtuous situation. One of compromise, agreement and co-operation. There are question marks however over how representative that consensus really is.

It is not unfair to characterize delegations as being male-dominated and sourced in many cases exclusively from within a nation’s government.

Indigenous groups are absent, the youth are sidelined and most civil society involvement in the talks is limited to two minute statements at the end of each negotiation session.

The “quality” of the consensus would be improved with wider participation, even if the pace of the talks continued as they are.

The goal for advocates of changing the current system, changes which would require a consensus decision from the UNFCCC’s 195 Parties, is to reach ambitious decisions more quickly.

There is a danger however, that making alterations now would create more distractions and procedural issues, the very points that those looking to delay the talks seize upon to slow down progress.

The Convention itself was reached by consensus, as was the Kyoto Protocol. How much more complicated would negotiations on Kyoto be now if one third of the delegations had never liked it in the first place?

As much as developing agreement and trust in future actions, consensus also makes it harder for nations to regress the talks to past conflicts. The “speak now or forever hold your peace” policy means negotiators can focus on the things they disagree about now.

Ruling out a greater role for voting would be foolish, but with the stakes as high as they are, it is difficult to imagine an enthusiastically embraced global deal coming into force in 2020 by anything but consensus.