Hurricane Sandy: the climate change alert the USA was fearing

Whether or not Hurricane Sandy is the direct consequence of climate change is a moot point.

But New York has already been identified as a climate vulnerable city and the Frankenstorm could prove to be an unwelcome demonstration of weaknesses that were not expected to be exposed for some time.

It might not be as ferocious as hurricanes that have made landfall further down the US Eastern Seaboard but its 75mph winds are likely to run for two days. And a storm surge exacerbated by a high tide will replicate some of the most likely challenges predicted for New York in a world beyond the estimated safe level of warming of 2°C.

The current science on the interaction between climate change and the frequency and intensity of hurricanes and storminess in general, is far from conclusive. Linking one weather event specifically to climate change simply cannot be done robustly.

What can be said on the science is that a trend is emerging. In warm years, there are more big cyclones. Therefore the warming earth will likely exhibit a growing number of these big storms. 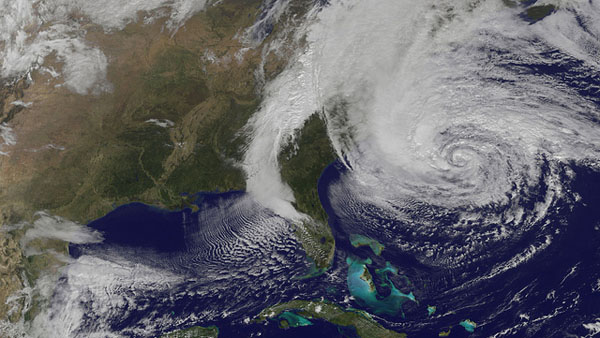 Hurricane Sandy heads for the east coast of the US. (Source: Flickr/NASA Goddard Photo and Video)

The science behind Hurricane Sandy, is complicated further by the addition of an Arctic cold front that has wrapped itself around the hurricane. The result is a very large storm hundreds of miles across. So is New York ready for this kind of extreme weather event and a future riddled with increased storminess?

A report by Cornell University, assessing the potential changes on New York State under a scenario with 3°C of warming by 2050, said that storm surges could flood subways and other transportation tunnels within an hour. At the time of writing, New York City’s subway is shut down in anticipation of the Hurricane Sandy’s arrival.

The report also recommended moving crucial utility infrastructure to higher ground, advice that appears to have been taken with one new power plant being rebuilt four feet higher above the ground.

Earlier this year the Federal Emergency Management Agency (FEMA) said that the 2005 hurricane season alone had cost the US emergency services $18 billion. Dealing with the new reality using a ‘business as usual’ mindset, was no longer working.

“We cannot afford to continue to respond to disasters and deal with the consequences under the current model. Risk that is not mitigated, that is not considered in return on investment calculations, often time steps up false economies,” said Craig Fugate FEMA’s Administrator.

What the Hudson River has done so far ; it has yet to rain #Hoboken God bless ; pray ! instagr.am/p/RWej23DSiz/ 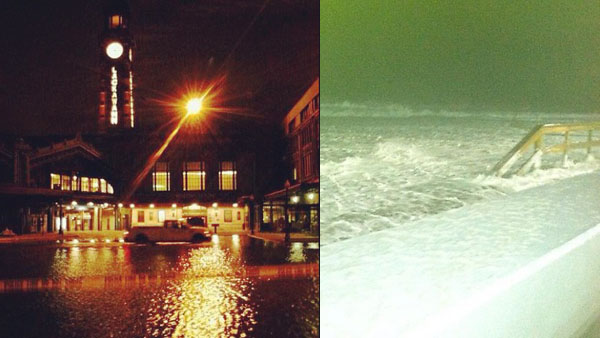 Even before the storm had reached New York, pictures on twitter showed the River Hudson spilling over and seawalls already at capacity. Paying for improvements to this infrastructure now, would help reduce the unsustainable costs referred to by Fugate.

The real question is whether New York, along with other low-lying world cities like London, Calcutta, Shanghai, Amsterdam, and Manila are prepared to invest to offset the risk of future climatic shifts and sea level changes that are coming our way.

Insurance firms, specialists in quantifying risk, are not satisfied with the progress so far and are raising prices to account for climate change.

Hurricane Katrina led to $40bn in claims. The value of property at risk from Hurricane Sandy is thought to be as high as $88bn. But insurers are unwilling to take the hits repeatedly and want to see more adaptation work by governments and business to build resilience to the new normal.

They have already begun shifting the risk of hurricanes northwards up the US coastline as storm tracks deviate from more familiar paths. In the UK insurers are looking to withhold coverage for homes in at-risk flood areas.

There are a number of options available to cities.

Building flood defences protects what is already in place, changes to planning laws can stop the areas at risk from becoming more densely populated. Some have argued that rebuilding these cities is not the right option and instead populations should be moved on.

UNICEF: We must teach urban kids how to deal with disasters

An IPCC report into managing climate extremes and disasters refers to “low-regrets” measures. If a city is prepared for the worst case scenario of future sea-level rise, it will be protected from storm surges in intervening years.

In the developing world, the benefits of acting now are even greater. better defences can also mean improved irrigation, protected ecosystems, reduced spread of disease and a number of other development benefits.

The 2011 floods in Thailand have been determined to have fallen within normal ranges.

The rainfall in the build-up was not unusual, and despite claims to the contrary climate change effectively played no visible part. The problem was largely with Bangkok’s flood defences and changes in land use that gave the water nowhere to go.

The country’s government has responded with a $11bn round of improvements to its flood defences. If a city is prepared, it will be protected from all unfriendly storms and flood events, climate induced or otherwise.

RTCC Video: Nick Davidson from the Ramsar Convention describes the role mangroves can play in boosting resilience to storms