The Australian government has found itself under increasing pressure to sign up to a second commitment period of the Kyoto Protocol (2CP).

Next week is the last sitting week of Parliament before Doha, and possibly the last chance for cabinet to consider the issue. However it is unclear what they will decide.

During her recent visit to the country, UN climate chief Christiana Figueres challenged the country to stick with the Protocol, arguing it was in its national interest to do so.

In a speech at the Lowy Institute for International Policy in Sydney she said Australia, a country increasingly vulnerable to climate change, needed to join other countries in aggressively mitigating carbon emissions.

Environmental groups within the country are also increasing the pressure on their government. Members of Climate Action Network Australia organised a #Kyoto2 Twitter Storm calling on the country’s ministers to agree to a second period.

And while it’s unclear what effect that had on Prime Minister Gillard (if any), recent polls show that support for the government to take a lead on climate action is steadily growing. A poll commissioned by WWF in August showed 58% of voters want to see Australia sign up to a second commitment period.

RT if you want Australia to follow through on action on climate change: @juliagillard @swannydpm @bobjcarr It’s time to sign #Kyoto2

[email protected]bobjcarr – Without a global solution, #climate change may wipe out decades of hard-won development gains. Australia must sign #Kyoto2

Australia was a latecomer to Kyoto, ratifying the agreement in 2005. Their current target is a 5% reduction on 2000 levels.

The future of the Kyoto Protocol will be top of the agenda at the forthcoming COP18 climate talks in Doha.  The first commitment period comes to an end this year, and developing countries are urging the developed world to renew their pledges as soon as possible to prevent a gap between the two periods.

A renewed Kyoto is seen as crucial to ensure negotiations on a global climate deal in 2015 remain on track. A decision by Australia to join the EU, Norway and Switzerland in adopting new binding emission targets would give those a massive boost.

“A second round of targets under Kyoto is a critical lever to achieve a new legally binding agreement that covers all major emitters,” said John Connor, CEO of the Climate Institute. “Kyoto remains a key stepping stone to translate the action China, the USA and other major emitters are taking into international law.” 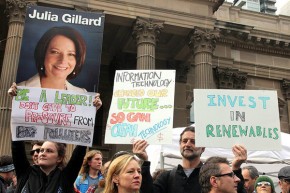 Will the Australian government give into pressure and sign up to Kyoto Protocol II? (Source: Flickr/Takver)

Australia appears to be increasingly vulnerable to the impacts of climate change – floods, droughts, heatwaves and wildfires have all affected the country in recent years.

The difficulty for any incumbent government is that it is also a country heavily dependent on carbon-intensive resources. It is the world’s fourth-largest coal producer, and has the highest per capita greenhouse gas emissions of any country in the developed world.

Small steps are being made – this year Julia Gillard’s government introduced a series of market mechanisms and incentives aimed at tackling Australia’s contribution to global emissions.

The Clean Energy Future Package, introduced in July, includes a national reduction target of 5% on 2000 levels by 2020, and 80% by 2050. It also includes a range of policy instruments to put a price on carbon, promote renewable energy and increase efficiency.

Trade Minister Craig Emerson memorably celebrated the adoption of a tax on carbon with an impromtu rendition of the 1970s classic tune ‘Horror Movie’ on live TV.

Gillard also announced plans to link up with the EU emissions trading scheme – some have suggested this was to ensure the Green Party continued to support her minority government.

Relations between Australia’s main parties appear to be at an all-time low, making any chance of a cross-party consensus on this issue unlikely. Gillard recently accused opposition leader Tony Abbott of misogyny in a fiery 15 minute lecture that went viral on the internet.

Abbott says he will repeal the carbon tax if elected, but in an odd twist did claim earlier this year the opposition would not object to a second commitment of the Kyoto Protocol.

As the deadline for decisions get closer, there are also fears countries are leaving their decision till the last minute in the hope of using it as a bargaining chip in Doha.

New Zealand and Ukraine are yet to give an answer on their intentions. Russia’s leaders change their mind every couple of weeks.

In a speech to Australian policymakers Figueres said the country was currently was a leader in climate change measures, but warned them should not believe they are the only nation acting on the problem.

“Nothing can be further from reality,” she said. “Every one of Australia’s top trading partners has something already in place.

“Australia is not alone in acting on climate change… in fact Australia is a major player and an emerging leader. The world is looking very closely to see how Australia progresses with its clean energy policy.”

She also warned that if climate change was allowed to go unchecked, it would wipe out all of the good work done over the last 25 years in terms of development. “There’s no plan B because we don’t have a planet B,” she said.