The EU is on track to meet its emissions reduction targets under the Kyoto Protocol, according to the latest figures released as the treaty faces a pivotal period in its history.

Data released by the European Environment Agency (EEA) show emissions for the EU fell 2.5% in 2011 leaving the group well on track to exceed its target under Kyoto of 5% between 2008-2012 compared to 1990 levels. Its own target of a 20% cut in greenhouse gas emissions by 2020 is also attainable.

“The EU is delivering on its Kyoto commitment. While our economy grew 48% since 1990, emissions are down 18%,” said Connie Hedegaard, European Commissioner for Climate Action. “These figures prove once again that emissions can be cut without sacrificing the economy.”

EU environment ministers will meet on Thursday to discuss the bloc’s position ahead of the UN climate change talks in Doha, which begin in November. 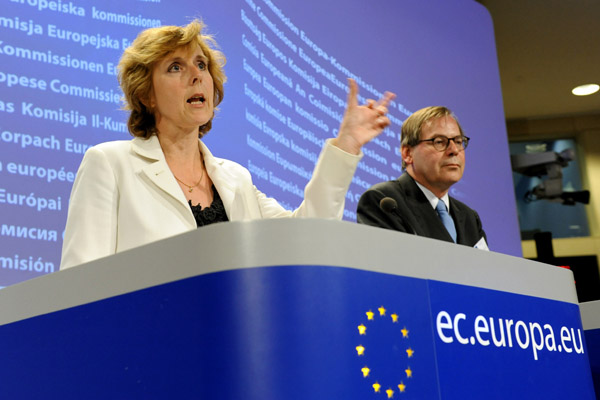 European Climate Action Commissioner Connie Hedegaard says the bloc will hit its emission reduction targets as focus shifts to next round of commitments. (Source: EC)

One of the key issues on the agenda in Qatar will be the second commitment period of the Kyoto Protocol (2CP). The future of the talks through the UN Framework Convention on Climate Change (UNFCCC) is dependent on developed countries already bound to Kyoto, establishing a meaningful 2CP to begin on January 1, 2013.

While the EU is expected to lead the development of a new commitment period, the depth of its own new round of cuts through the Protocol is unknown.

The EU has been called to increase the ambition of internal 2020 target by establishing a 2030 goal of 30% instead. It is understood now that the 2030 framework will not be decided until 2014.

Countries outside the EU also face tough decisions. Australia, which has imposed a carbon price this year and announced plans to link up with the EU Emissions Trading Scheme (ETS), is yet to reveal whether it will make legally binding cuts under the Kyoto Protocol during the 2CP.

Environmental groups have sought to ramp-up the pressure on the Australian Government with a Twitter storm calling for the country’s involvement in 2CP.

Russia could yet surprise the international community by signing up as well.

At a recent Russian ministerial meeting, the perception that the government was universally opposed to making binding emission cuts under Kyoto collapsed when it was revealed that “the economic bloc” of Ministries is keen to take part for commercial reasons.

The country is sitting on a stockpile of unused emission credits that it was awarded based on estimates from before the break-up of the Soviet Union. The EU has said this week that countries that do not take part in 2CP, should have any remaining credits dissolved.

As well as the value of its remaining carbon credits, Russia has also benefited from Kyoto’s Joint Implementation programme (JI). Access to the JI could be cut off as part of a rule change for 2CP, unless the country makes pledges of its own.

New Zealand and Ukraine could also join a 2CP at the talks in Doha.

The integrity of a new round of commitments is seen as a crucial piece of goodwill from developed countries as negotiations continue in Qatar for an all-inclusive, global deal on emissions, penciled in for 2015 with a 2020 start date.

Developing countries will insist on ambitious cuts for 2CP, with the possibility to scrape deeper before 2020 if appropriate, as well as the inclusion of emissions from as many different sectors and as many countries as possible.

Figueres: Asia is new centre of the universe for carbon cuts