The Green Climate Fund’s (GCF) landmark decision on a host city risks being overshadowed by controversy over access to the meetings for NGOs.

While one of six cities will be selected as the fund’s long term base at the conclusion of the GCF’s second board meeting in South Korea this week, issues over the participation of so-called observer organisations remains a problem.

Charities, think tanks and campaign groups are typically admitted to UN proceedings and given a platform to contribute to the debate. This access has been severely limited at both of the GCF board meetings however.

“We feel a bit like kids begging a teacher to let us talk, it’s quite retrograde,” said Karen Orenstein, International Policy Campaigner with Friends of the Earth (FoE) US. 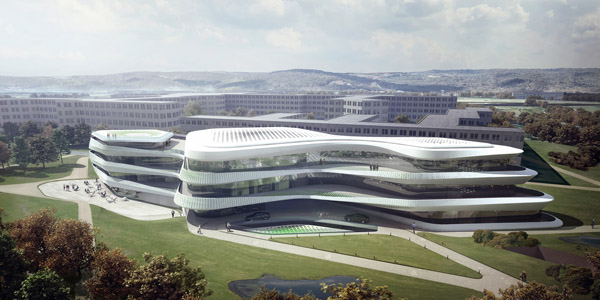 The German bid for the Green Climate Fund would see this proposed new building house its employees in close proximity to the UNFCCC in Bonn.

“We had two short interventions accepted on Thursday but both our requests for interventions today, even with the promise that they’d be kept under one minute, were rejected. There were draft documents distributed for consideration today as well but we were told we could not have a copy,” Orenstein told RTCC adding that there were only eight or nine civil society representatives at the talks.

“FoE US wants the GCF to succeed, to be a good fund with environmental integrity and justice at its core and something we can improve and fight for in the future. But it is not setting a good precedent and it is very frustrating to be spending time just trying to even get into the meetings,” said Orenstein. “Some people are wondering why they flew half way around the world just to watch a live feed of the talks.”

She was unwilling to speculate on the “rumours” behind the root cause of the limited access.

The GCF has been criticised previously for being too close to the private sector and the World Bank, which will act as its trustee for the first three years of its operation.

Meanwhile, Henning Wuester Senior Manager at the Interim Secretariat of the GCF, says the vote to decide on the host city will take place on Saturday morning (October 20).

“First the co-chairs will look to see if there is a consensus around one city and failing that there will be an informal process to assess which nominee has the largest support,” said Wuester.

“I expect board members to take a broad set of criteria into account for their decisions. I am impressed by how strong all six bids still are,” said Wuester.

“They made presentations at the first meeting in August and again today. They have all put a lot of documentation on the table. If anyone doubts that there is support for the GCF they need only look at the bid documents to see that there at least six countries with a belief in what we are trying to do at this stage.

“Many see the GCF as the key building block to make the changes we need in reality. A functioning fund that can make things happen should make the UNFCCC negotiations easier. The money won’t be available in Doha, but when everyone sees that the GCF is moving forward it will make a positive impact on the talks in Doha,” said Wuester.

Orenstein said the GCF will only make its impact once there is money committed.

“The choice of host city and having a nice building doesn’t really matter if there is no money in the fund. What would really provide the UNFCCC process with a bit of a boost would be some financial pledges,” she said.