Russia has already said it will not take part in a second commitment period to the Kyoto Protocol. This week Prime Minister Dmitry Medvedev went a step further, saying that the country could pull out of the climate treaty altogether. But in Russian climate politics – all is not what it seems.

Welcome to the crazy world of Russian climate policy.

For the second time in two months, I find myself explaining the way through its wicked streets – because yet again we have startled the world of global climate policy. No surprise there, though, as in the desert that is media coverage of Russian climate policy, every small step seems quite a leap. 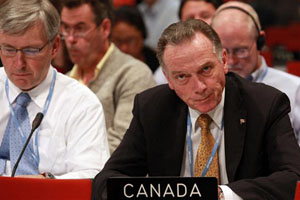 While the press reported that Russia was about to “go Canadian” and walk away from the Kyoto Protocol entirely, the truth is more complex, and more optimistic.

Russian and foreign media reported that Prime Minister Dmitry Medvedev told a government meeting on Thursday that since Russia has not really gained much from its participation in the protocol, perhaps it might be wiser now to just abandon the treaty for good.

Sounds like a wild jump from September cover stories about us heading back to KP, doesn’t it? All these U-turns could make anyone feel dizzy, for sure.

Except that’s not what happened.

Yes, there was a government meeting where ministers discussed several issues, one of them being a 2020 national plan of action for environmental protection.

In his comments on that only-remotely-climate-related plan, Deputy Prime Minister Dvorkovich all of a sudden said “by the way, there’s one more thing – Kyoto Protocol”.

As if that was not enough for us news reporters to drop our jaws, a rather brief exchange of remarks between Medvedev and Dvorkovich resulted in the former tasking the latter with a review to be prepared for one of the next meetings.

Medvedev, despite appearing skeptical about the whole thing, asked, “is there some reason to reconsider this?”.

And Dvorkovich’s answer to that question is what really mattered in the whole scene, but, sadly, it was ignored by the mainstream media.

Remember how in my first column we talked about a stairway of bosses (supposedly) reporting all the way up to the decision making floor?

Well, this was that conveyor belt of opinion in action.

Business lobby groups last week proudly told a conference of like-minded experts that they had co-opted Andrey Belousov, the economic development minister, who wrote to Dvorkovich asking for a reconsideration on purely economic grounds.

One of their top lobbyists also reportedly managed to get some face time with the president’s advisor Elvira Nabiullina, who led the economic ministry in 2010-2012, when joint implementation (JI) finally got some traction after years of stalemate.

So, back to yesterday – what does Dvorkovich answer? “Nothing really changed in terms of global negotiations, so personally I think we should stand still. Our colleagues in the economy bloc (of ministries), however, have a different view”.

This way, the Deputy Prime Minister essentially summed up a year’s worth of preaching sessions and finally dismissed the notion that Russian government is unanimous in its stand on Kyoto.

There are grounds to believe that Dvorkovich did what he did (“butting in” on a hardly related conversation) on purpose – that purpose being a quick permission to legitimize the ongoing discussion and bring it up to a level where decisions can be made, not just recommendations.

And from what we see now, this permission has been granted. Sources report that the meeting resulted in a formal request to review the feasibility and possible economic benefits of keeping the JI mechanism, not Russia’s participation in the protocol.

Wording is very important in this whole story, as matters at stake are purely economic and, in fact, have nothing to do with environmental concerns or international policy. Regardless of what one might think of this somewhat unconventional line of argument, it’s the only one that could possibly work – and it did.

On a side note, it also resulted in some quite surreal comments such as a prominent climate activist telling the government to listen to business on this, because they should be the ones to decide.

So why then are the media talking about Russia ‘going Canadian‘, then?

One word: context. The only way to interpret this brief and rather mysterious governmental incident correctly is by putting it into context. Knowing the whole story is essential, and in a cargo cult of a policy, perhaps, doubly so.

Does this mean the odds have shifted from 50:50? Probably not.

Is it, finally, the good guys turn in the twisted battle of the Kyoto second commitment period? Absolutely.

Results of this review are due in a week or two, and this should also be fun, so stay tuned.