Guidelines on the deployment of geoengineering have been agreed at the UN biodiversity summit in Hyderabad following intense negotiations.

Countries agreed on a text that specifies what geoengineering means, outlines when it should be used, acknowledges its potential impacts on biodiversity and the potential cross-border consequences of its use.

The document stresses the priority of addressing climate change through mitigation measures, such as increasing natural carbon sinks, and calls on all experiments to take into account international laws and conventions, including the UNFCCC, the UN’s climate change convention.

It also reaffirms the decisions taken at COP10 in Nagoya that called for scientific evidence for the need of geoengineering before any experiments take place.

Geoengineering is designed to tackle the effects of climate change by either removing CO2 from the air – by pulling gas from the atmosphere or increasing absorption in the sea – or limiting the amount of sunlight reaching the earth’s surface.

Large scale projects are still largely in the concept phase but given the deadlocked state of mitigation efforts, many think geoengineering will be essential for the world to avoid dangerous climate change. 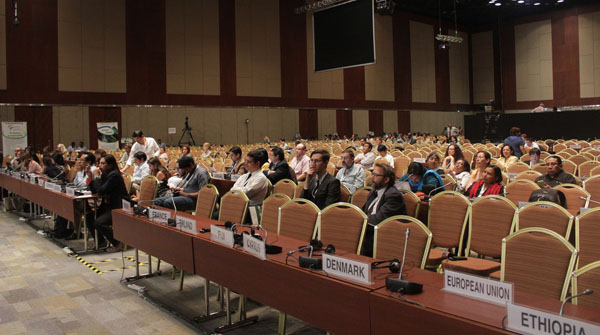 This agreement  will come as unwanted to news to the companies and countries wanting to invest in these technologies as climate change predictions worsen. This year there have been two major efforts to test methods of sucking CO2 from the atmosphere.

In May a UK-backed project that planned to inject 150 litres of water into the atmosphere to create a cooling effect was cancelled at the last minute over concerns that certain researchers had a conflict of interest.

But in July, the largest experiment to date took place off the west coast of Canada when 100 tonnes of iron sulphate was dumped into the ocean. Iron in the sea can create a ‘bloom’ of plankton that absorbs carbon dioxide and then sinks to the ocean bed – storing the carbon there.

Scientists have, however, raised concerns that it can harm ecosystems, produce lifeless waters and worsen ocean acidification. It was also revealed earlier this week that the Canadian government may have known of the plans before they went ahead.

The test was criticised by the international community who said the experiments breached moratoriums of two UN conventions, one under the CBD – set out in the Nagoya outcome – and the other in the 1972 London Convention that prohibits the for-profit dumping of iron into the sea.

Ahead of the conference, groups including Bolivia, the Philippines and African nations, as well as indigenous peoples groups called for an enforceable test ban on geoengineering experiments.

However, the paragraph calling on parties to ensure all tests of geoengineering technologies take place in “controlled laboratory conditions” was removed from the text, despite protests from countries including Peru and Argentina.

Countries traded giving up the paragraph with text that ‘reaffirms’ – over a weaker ‘recalls’ – decisions agreed in Nagoya:

“No climate-related geo-engineering activities that may affect biodiversity take place, until there is an adequate scientific basis on which to justify such…with the exception of small scale scientific research studies that would be conducted in a controlled setting.”

Under a separate paragraph the parties also noted that a ‘precautionary approach as well as international customary law’ should be considered when geoengineering plans are being made, as well as other conventions work in this area, including the London Convention.

There was also some discussion between parties about what constitutes geoengineering. The outcome text called parties to be aware of all existing definitions, and the ongoing work in this area.

It also lists several broad descriptions of such methods including reducing solar insolation, carbon sequestration from the atmosphere and large-scale manipulation of the global environment.

The sub-point on the ‘deliberate intervention in the planetary environment of nature’ caused some concerns between countries.

Brazil warned that this text could be interpreted to include projects such as REDD+ or Carbon Capture and Storage (CCS), which could also be considered as ‘deliberate interventions’.

The document will now be absorbed into the final outcome document to be approved on the last day of the conference tomorrow.