UN biodiversity chief Braulio Dias has called for negotiating teams in Hyderabad to break the current deadlock over finance and demonstrate a “willingness” to talk.

Speaking on Monday afternoon, Dias would not comment on how much money he expected to see pledged, but he did say that he expected movement on this issue before the end of the conference on Friday.

“I am expecting a good indication of willingness on all sources of finance and funding for the Aichi Targets to come forward and to move the agenda along,” he said.

“We are launching a pledge where all countries can become champions to help other countries to implement the Aichi Targets – that could be finance, capacity building etc. Organisations under the convention can get involved too.

The main focus of this year’s summit is how to implement two agreements signed off in 2010: the Nagoya Protocol and the Strategic Plan on Biodiversity.

The Strategic Plan aims to halve biodiversity loss and increase protected areas by 17% worldwide by 2020, and sets out 20 ‘Aichi’ targets. The Protocol aims to promote benefit sharing of genetic resources and ensure countries are rewarded for conserving them. 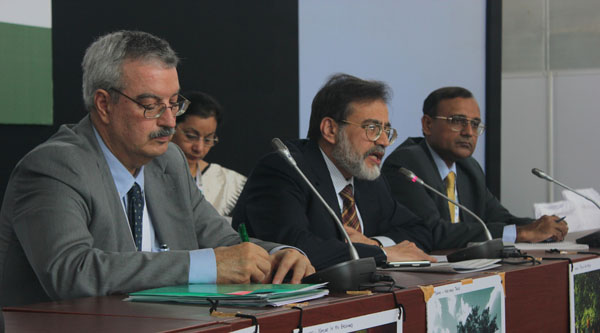 CBD Executive Secretary (left) and Special Secretary for India’s Ministry for Environment and Forests (centre) said they were pleased with the progress made at this year’s biodiversity conference (Source: CBD/Flickr)

Talking at a joint press conference with the Indian Ministry of Environment and Forests, Dias said he felt “even the most difficult talks are progressing in good spirits” in Hyderabad.

Shri M.F Farooqui, Special Secretary of the Ministry echoed Dias, saying he felt progress had been made and that the high-level discussion this week would add political impetus to discussions.

While the convention has already been able to agree on four sections of the outcome text – biofuels, taxonomy, plant conservation and financial incentives – working groups and contact groups continue to debate the more contentious issues.

Last week finance negotiations broke down in a farcical fashion after delegates were unable to decide the order topics should be discussed.

A global north-south divide was apparent – developing countries pushed for strong targets by the end of this week, while developed nations called for more time to work out a firm reporting framework.

Farooqui warned that it is important not to put a figure on the Aichi Targets too soon, but he said that an intermediate or interim approach should be found at this conference – as well as a road map for future discussions in this area.

“Baselines are not easy to set,” he said. “It is a work in progress even for countries who have already made their reports. All parties recognise that it will take time.

“Also what is a robust baseline? It is a relative concept and for many parties it will come gradually. It is possible to look at the interim and to reach an agreement on the information that is already available.”

He added that he remains optimistic that even the most complex discussions will be resolved before the close of the conference on Friday.

“We have various working groups and contact groups and friends of the chair groups working. I am quite confident that the remaining issues will be resolved well in time,” he said.

Youth anger at lack of participation in UN biodiversity talks

Video: Braulio Ferreira de Souza Dias, Executive Secretary CBD tells RTCC that the agenda is set, and now it is time to focus on implementing these plans…