Parties to the UN’s Biodiversity Convention (CBD) have agreed that the impact of biofuels on biodiversity will be taken into account when they develop future energy strategies.

In a text agreed yesterday at CBD COP11 in Hyderabad 192 countries acknowledged concerns that biofuels ‘aggravate biodiversity loss’ and ‘resource over-consumption’, while recognising their role in mitigating carbon emissions.

The decision means all the world’s major states bar the USA – which is an observer at the talks – must incorporate biofuels in their long-term biodiversity strategies.

The development of biofuels has been blamed for environmental destruction as grasslands and forests are converted for their production. Concerns have also been raised over their impact on food security. Earlier this month the EU decided to halve its target for biofuels from food crops. A recent report even suggested biofuels could increase greenhouse gas emissions.

China, Brazil and the USA are the world’s biggest producers of biofuels. The UN’s main food agency the FAO predict global ethanol production will double between 2007-2017 reaching 125 billion litres, while biodiesel is predicted to increase from 11 billion litres to 24 billion litres over the same period.

The text calls for regular monitoring of these changes and a “precautionary approach.” 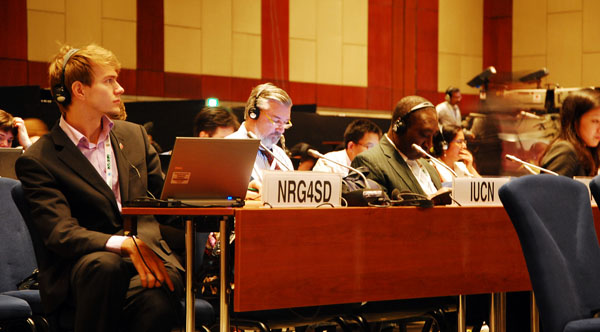 COP11 has been a fairly well-natured conference, but the subject of Biofuels has seen heated debates in the main plenary

Brazil welcomed the agreement and demanded that the CBD recognise the ‘beneficial nature’ of biofuels. Brazil is responsible for the production of 21.1 billion litres of biofuels a year – making up 25% of global supply in 2011.

It also argued that there is no one solution, suggesting that states should be assessed on an individual basis, a view supported by Argentina, which added, “Biofuels should not be considered as the only energy technology which has an impact on biodiversity.”

Other parties were less happy with the agreement. “We do not believe that biofuels are the answer to the current energy crisis or for mitigating climate change,” said Bolivia.

It asked for the positive impacts of biofuels to be removed from the text entirely.

Its delegate warned that in a world where one in seven goes hungry, the food versus fuel argument that follows biofuels must be further emphasised by the convention.

Ethiopia and Qatar raised concerns over the text for similar reasons, while Niger urged a “precautionary” approach be adopted, particularly for nations where food insecurity is high.

It also criticised countries for trying to re-open a text which had already been discussed at length earlier in the year, and which they say they compromised to reach.

Bolivia had the final word, with its delegate calling on all the impacts of biofuels to be taken into account: “The food crisis is a reality, deforestation, all factors are reality – this forum happens in this world and we need to reflect that,” they said.

Following a final call from the group’s chair for countries to compromise they were able to agree on the text as it stands.