Discussions on financing the Strategic Plan on Biodiversity have broken down at the UN’s summit in Hyderabad.

Talks this morning ended an hour earlier than expected when countries hit a deadlock over procedural matters.

The main argument was over the structure of the latest text, released today, and what should be negotiated first – targets for financial resources or a framework to report and monitor these pledges.

The split between the developing and developed world was apparent with neither side willing to budge from their position.

A target of this year’s Convention of Biological Diversity summit is to implement decisions reached at the last conference in Nagoya two years ago – the Nagoya Protocol and the Strategic Plan on Biodiversity. These require financing, although no targets have been set.

The Strategic Plan aims to halve biodiversity loss and increase protected areas by 17% worldwide by 2020, and sets out 20 targets – the Aichi Targets – to achieve this. The Nagoya Protocol aims promote benefit sharing of genetic resources and ensure countries are rewarded for conserving them. 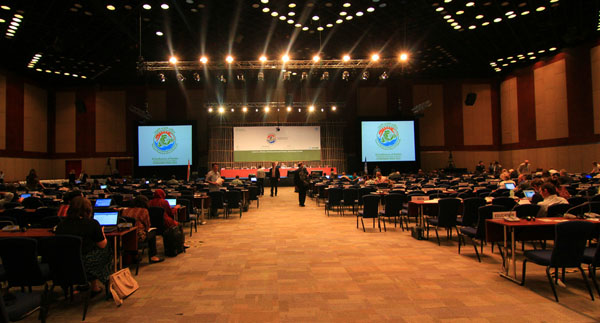 Two main approaches to generating cash have emerged over the last week.

Mexico, the Philippines, China, South Africa, Uganda and Malaysia have all called for firm financial targets to be agreed in Hyderabad, as agreed at the last COP. They say developed countries must stand by this pledge.

Malaysia’s negotiator said “countries want strong targets on resource mobilisation” without which they argued the Aichi Targets could not be achieved.

Philippines on need 2 adopt fin. targets 2 start implement’n-saying ‘let’s now start the process’ is NOT an answer to a disaster #COP11#CBD

Developing nations also said that sources of money had to be much larger than the current $6 billion pledged for biodiversity.

On the other side of the debate, the EU, supported by Canada, Japan and Switzerland said that before targets can be set, a financial framework that establishes how much each country needs must be drawn up.

The EU delegation demanded these were put in place before they could discuss targets.

In the space of an hour the atmosphere in the negotiating hall turned fractious, with developing nations arguing they had already made too many concessions at previous biodiversity summit in 2010.

Despite efforts by the EU to reassure developing countries that they were committed to providing finance, South Africa, an influential voice at UN environmental talks, summed up the despondent mood of the global south.

Their delegate called on parties to: “start with where we want to get to and then look at how to get there. In Africa we are good at signing and dancing, we have had a lot of signing and dancing at the last COPs, we have already made a lot of concessions. We are not here to sing and dance; we are here to get resources.”

The Ugandan delegate went further, saying that if countries did not get the outcome that they needed: “maybe we will retire … why are we continuing like this?” he asked.

On a slightly more light-hearted note Namibia suggested that the group split – with developing nations dealing with targets, and developed nations on frameworks. That way everyone could agree. “I am being factitious…If we do not laugh a little bit now, we will cry a lot later,” he said.

With delegates unable to agree how to move forward, a smaller Friends of the Chair group will work with co-chairs to find a resolution.