India’s government has been urged to stop building sea walls and concentrate on developing mangrove forests when it develops future climate adaptation strategies.

Deepak Apte from the Bombay Natural History Society, one of India’s oldest environmental institutions, told RTCC sea walls were contributing to coastal erosion in India and adversely affecting the vast ecosystems along the country’s coastline.

He said natural adaptation methods like mangrove forests were more effective at absorbing storm surges and had the added benefit of soaking up large quantities of CO2.

“The easiest thing we are doing at the moment to respond to climate change along the coast is building sea walls. Unfortunately what this means is that the critical condition of the coast today is a result of these sea walls,” he said. 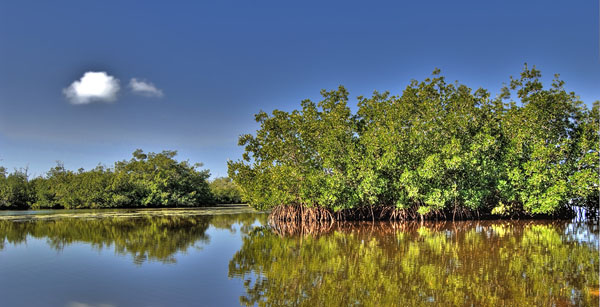 Currently 50% of the Indian population relies on natural environments for their income. The country has the seventh largest national coastline in the world, home to over 2000 species of fish as well as a variety of coral.

These ecosystems are under threat from sand mining – which has increased dramatically as the government seeks to provide sea walls, designed to protect the country against rising sea levels and storm surges.

Mining and dredging can lead to long-term coastal erosion. It impacts adversely on plants and animals relying on sandy beaches for their survival and fisheries.

In India sand mining of riverbanks has contributed to the near extinction of the gharial crocodile. It also threatens sea turtles that rely on beaches to lay their eggs.

During talks today on this issue at CBD COP11, Thailand called for more focus on the role that mangroves have in protecting coastlines, and also pointed to the continued degradation of this resource: “Mangrove forests in Thailand continue to be adversely affected by coastal development,” it said.

The EU and Croatia also highlighted the role of ecosystem-based adaptation, but Apte says it is often only regions who have experienced the impacts of climate change who fully understand the potential of conserving beaches and forests.

He says this can be seen in the different attitudes of the West and East coasts of India: “I think that climate change has not been able to teach us what the tsunami in 2004 taught us,” he said.

“Now people on the east coast realise the importance of mangroves, for me working as a conservationist I could not convince people about mangroves for 20 years, but one natural disaster did. Do we need to have another tsunami on the West Coast to make people aware of mangroves? Our mangrove cutting continues unabated on the west coast.”