Eve tickling: The USA are not a party to the CBD (along with the Holy See, Andorra and states with limited recognition), but that has not stopped them sending a delegation of around 30. Their security briefing took place yesterday at our hotel during breakfast. Look out for pearl scams, pickpockets, buses that spontaneously combust, riots and what their security officer called eve tickling (groping).

Protests: NGO CBD Alliance has called on countries not to attend a tournament hosted at the Hyderabad golf course for delegates. They say the construction of the course has adversely affected the ecology and a local heritage site, Naya Qila Fort.

Warning: It’s impossible to escape climate change impacts here. Organisers have warned that with every 1 degree Celsius rise in temperature 10% of species could be under threat. It’s clear that climate change could be the dominant factor of biodiversity loss – ensuring all delegates will have one eye on the UNFCCC summit in Doha this November.

Negotiations: Implementation of decisions from the last CBD summit (COP10 in Nagoya) dominated Tuesday’s proceedings. The provision of finance is proving a major headache – with many pledges remaining unfulfilled. The Latin American and Caribbean Group (GRULAC) highlighted the need for additional and predictable sources of finance. The African Group called for international finance to increase by 20% annually.

REDD+: In the other working group an afternoon session examined the links between climate change and biodiversity. Discussions on REDD+ revolved around how the CBD could work alongside existing agreements under the climate change convention. We understand the CBD may recommend that REDD+ negotiations are transferred to their sister convention the  UNFCCC.

Geoengineering: Another climate-related issue is a hot topic in Hyderabad. Delegates raised concerns over the need for a science-based, global framework for understanding what impact these technologies could have. Ghana, the EU, Argentina, South Africa, the Philippines and Kuwait backed a call for a: “comprehensive, science-based, global, transparent and effective framework for those geoengineering concepts that have the potential to cause significant adverse transboundary effects and are deployed in ABNJ and the atmosphere.” Clear?

Indigenous communities: How can new laws help and hinder indigenous communities in their conservation efforts? In a side event held by Natural Justice Harry Jonas from the group highlighted that legal support for these groups remains weak or absent.

Youth: India’s biodiversity youth groups have laid out their own National Biodiversity Strategy and Action Plan for the country, but there is still some anger that groups are not being given an opportunity to take part in the talks. A coalition of international youth groups have called on the CBD to create National Youth Delegations for future conferences. It’s not all bad news – in an unusual but positive move schoolchildren took part in a mock parliament event on biodiversity at the conference centre.

Picture of the day: 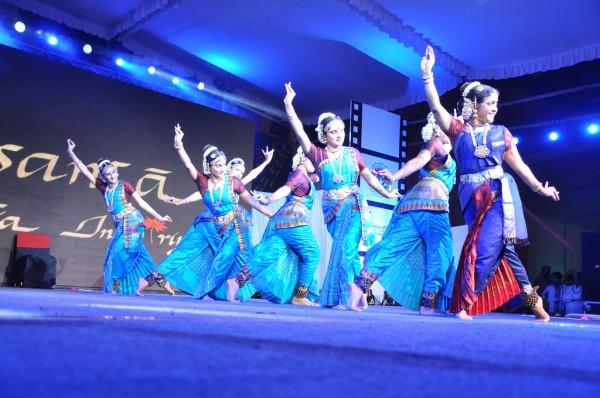 Delegates have been treated to some Bollywood dancing (Source: UNCBD/Flickr)

The US one of only 3 countries not to have ratified the UN convention on #biodiversity chinadialogue.net/article/show/s…> time to step up at #cop11 US

Latest video: Thomas Lovejoy from the H. John Heinz III talks to RTCC about the devastating impact of climate change on biodiversity…