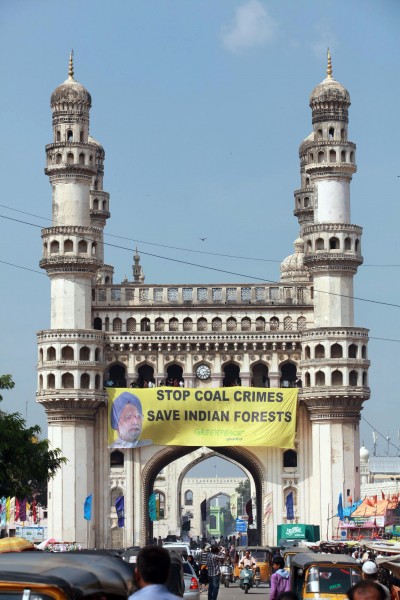 Greenpeace has called on the Indian government to stop what it calls ‘coal crimes’ and protect the nations forests.

In a protest coinciding with Environment Minister Jayanthi Natarajan’s visit to open the Convention on Biological Diversity’s (CBD) COP11 summit in Hyderabad, activists scaled the Charminar monument and pinned an anti-coal banner to its balcony.

The 60 foot banner read “Stop Coal Crimes – Save Indian Forests”. The activists called on the government to halt all new coal mining in India’s forest areas and show they are serious about conserving biodiversity.

“If you look at what is happening in India right now in terms of forest and biodiversity loss, it is phenomenal,” Greenpeace India campaigner Nandikesh Sivalingam told RTCC. “Expansion is taking place in terms of coal mining into our forests.

“We want to say to delegates here that there are so many threats to our forests unless we can stop coal mining from expanding into the forests it will be too late when we try and find out how we are going to save them.”

Bollywood actress Amla Akkineni was among the campaigners – six of whom were arrested.

Greenpeace allege that the government’s current policies will destroy at least 1.1 million hectares of forest land and displace tens of thousands of tribal communities.

Earlier in the year there were reports that previous “no-go” areas of forest had been opened up to industry.

In a country with a population of one billion, issues of poverty and shortages of power, the choice between development and conservation can be difficult. Three-hundred million people in the country still live without access to electricity.

India’s Central Electricity Authority has reported power deficits of more than 8% in recent months and earlier this year one blackout left as many as 700 million people in the dark.

The country also has also set itself a target to reach 33% forest cover, but so far has achieved around 25%. Denduluri Nalini Mohan, Chief Conservator of Forests, Adilabad District, Andhra Pradesh, India told RTCC that the country’s Conservation Act aims to ensure both communities and people are taken into account when it comes to new developments.

“India is a very vast country and it is one with a huge population also and the pressure of population on natural resources is increasing everyday,” he said. “We have a policy of participatory forest management that started in 1988 where we engage the local people to become partners in the process of development.

“Forests are covered by the 1980 Conservation Act which is a national act monitored by the Ministry of Environment and Forests in Deli and with regional offices across the country. Any agency which needs to use forests have to apply and it comes to us and we recommend if it is good or bad and if it does go ahead what conditions should be included.

“In many cases we reject it after weighing out the pros and cons and it often takes over three years for approval.”

He said that agencies wanted to use forestland must now compensate for this, and that much of the money goes in re-planting the same amount of trees elsewhere in the region, but Greenpeace believes this is not enough.

“We understand that coal is very important for our development,” said Sivalingam. “What we are saying is we have enough existing mines that we have to utilise efficiently and we need to have a real assessment on how much coal India requires in the future. There is huge potential for India to expand into renewable energies.”

Greenpeace India will release a report to highlight the expansion of coal mining on October 15, on the eve of the Indian Prime Minister Manmohan Singh’s address to the conference.

Nandikesh Sivalingam, forest campaigner with Greenpeace from Responding to Climate Change on Vimeo.