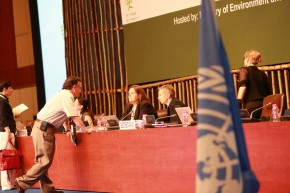 Countries call for more synergy between the biodiversity and climate conventions when it comes to REDD+ (Source: UNCBD/Flickr)

United Nations environmental negotiations on the REDD+ mechanism need to be streamlined, according to coalition of Brazil, Columbia, Ethiopia and Argentina.

The call came on day two of the Convention on Biodiversity’s (CBD) bi-annual conference in Hyderabad, India.

In today’s working group on biodiversity and climate, Brazil argued that negotiations did not reflect the progress made at the UN climate talks (UNFCCC) on REDD+ (Reducing Emissions from Deforestation and Forest Degradation).

Negotiations under the UNFCCC have made progress on the biodiversity and community safeguards of REDD+. They had agreed that indicators for these should be developed at a country level to take into account national priorities. Brazil pointed out this meant the CBD text on REDD+ was now out of date, that still set out international indicators.

“A great deal of progress has been made on REDD+ since COP10 [in Nagoya Japan],” Brazil said. “The outcomes of Cancun [UNFCCC COP16] and Durban [UNFCCC COP17] should be considered so as not to threaten the work being carried out under the UNFCCC and to ensure the CBD mandate is fulfilled.

“We must always take REDD+ negotiations in the context and the logic of climate change…This leaves a good part of the recommendations here redundant. We risk creating barriers to REDD+ rather than use it to its full objective. We should not forget that it was created for the needs of the UNFCCC.”

REDD+ is a UN-led effort to generate a financial value for the carbon stored in forests, together with encouraging conservation and protecting biodiversity.

The UN Convention on Biodiversity (CBD) holds a conference every two years, as opposed to the annual climate event. The current CBD text dates from 2010. In that time REDD+ has been debated at two climate summits in Cancun (2010) and Durban (2011).

The UNFCCC and CBD were both created in 1992, but operate independently. Critics argue they cover very similar themes, but do not always demonstrate synergy on issues such as REDD+ or finance.

Countries focus on finance as they move to implement biodiversity targets

RELATED VIDEO: Louis Verchot from the Center for International Forestry Research on the development of the REDD+ Mechanism