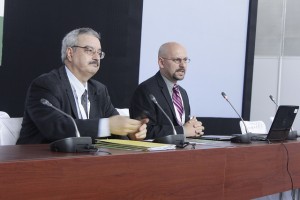 Dias (left) says it is the role of the convention to catalyse and provide support to developing nations (Source: UN CBD)

The UN’s biodiversity chief has called for more integration under the Convention on Biological Diversity (CBD) at the COP11 summit in Hyderabad, India.

Speaking at the opening ceremony of the conference, Braulio Ferreira de Souza Dias, appointed as the head of the CBD in January, said the secretariat must rethink the way it works.

“I would like to invite you to reflect on how we do business under the Convention,” he said. “We need to rethink our approach to the Convention and Protocols, notably to ensure proper linkages are maintained between them and that they operate in an integrated manner.”

Following the decisions at the COP10 conference, in Nagoya, Japan in 2010, the conference is working towards implementing two major decisions.

Countries are moving towards ratifying the Nagoya Protocol – which focuses on the benefit sharing of genetic resources – and they are also working towards setting out a roadmap for the Strategic Plan for Biodiversity leading to 2020.

Dias says because of the current priorities of the convention, more time should be devoted to countries and organisations learning from one another in open dialogues.

“I believe at this stage we should move to a more pragmatic approach, with less emphasis on negotiations and more emphasis on experience sharing in our pursuit of the Aichi Biodiversity Targets,” he said.

“To do this, we must rethink meetings of the Conference of the Parties with a view to having a more streamlined agenda, which will leave more time for dialogues and sharing of experiences on issues of implementation.”

Implementation was the word of the day at the CBD conference as countries began to move forward from the decisions taken in Japan.

Dias set out clear deadlines for this work, calling on parties to have ratified the Nagoya Protocol in time for its first meeting to take place alongside the next COP summit in 2014.

He also requested governments adjust their National Biodiversity plans to include the new Aichi targets and called on the finance to aid developing nations to be mobilised over the next two weeks in India.