Figueres: Asia is new centre of the universe for carbon cuts

Asia is now the global leader in efforts to reduce emissions, the UN climate change chief Christiana Figueres has claimed.

Speaking at the North American Carbon Forum in Washington DC this week, she said action to lower carbon emissions through carbon trading and other market based mechanisms would continue to increase and Asia was now leading that push. 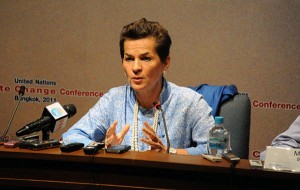 Christiana Figueres at the Bangkok climate conference in 2011. (Source: Flickr/UNclimatechange)

“Let’s look at what’s happening in Asia, which is the new centre of the universe in regards to emission reduction efforts,” said Figueres, the executive secretary of the UNFCCC.

“You will not read much about China in the US press, but China is number one in solar panel manufacturing and number two in wind technology, soon to be number one,” said Figueres, who has frequently used China’s clean technology progress to encourage more activity on the low carbon economy from the US.

“Seven [Chinese] provinces and large cities are developing their local voluntary trading system, and a national emissions trading scheme in the making, with technical support from EU and specialized institutions,” she said while also pointing to existing and planned carbon markets in India, Japan, South Korea, Indonesia, Thailand and Vietnam.

While praising regional plans in the US, Figueres suggested that the US would be well-served to take a more active role in “redesign” of the Clean Development Mechanism (CDM). The CDM is the main device under the Kyoto Protocol emissions deal and the only one that links developing and developed countries.

New market mechanism, to underpin the global carbon cutting deal that countries decided in Durban to pursue, will be based on the CDM.

“You are better off if you get involved in the design and the construction of the rules with which you will have to comply, rather than letting other write them for you,” warned Figueres.