The UN climate secretariat must show its support for a Financial Transaction Tax (FTT) if proposals for it to contribute to international climate action are to be fulfilled.

According to the Sustainable Energy & Economy Network/Institute for Policy Studies (SEEN/IPS) in Washington DC, the UNFCCC must send a signal to governments that the FTT has a legitimate role to play in raising funds to help developing countries cut their emissions and adapt to their new climate reality.

While the FTT may well fall beyond the reach of the UNFCCC’s remit, SEEN/IPS Co-director Janet Redman believes there is a role for it to play at the next meeting in Qatar this November.

“The UNFCCC in Doha can name and encourage the use of a variety of sources of innovative funding to send a political signal,” she told RTCC. “We’ve seen this with a levy on bunker fuels for shipping and aviation encouraging action through their respective industry organisations at the UN, the International Maritime Organisation (IMO) and International Civil Aviation Organisation (ICAO).” 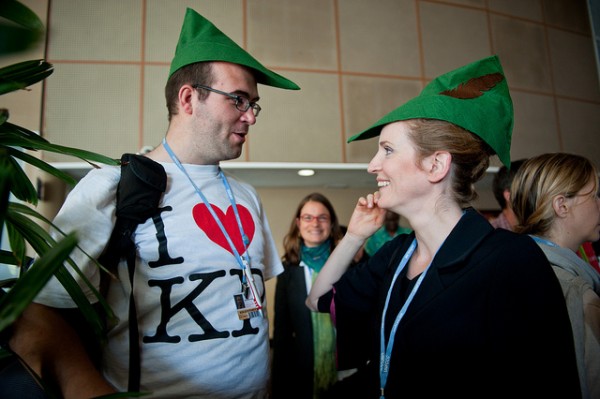 Nathalie Kosciusko the then French Minister for Ecology, Sustainable Development, Transport and Housing shows her support for an FTT at the Durban climate talks. (Source: Ainhoa Goma/Oxfam)

The FTT, sometimes referred to as the Robin Hood Tax, applies a small levy to financial transactions such as share dealings, commodity trading and currency speculation and could raise billions of dollars annually.

Clarification over details such as “additionality”, the pledge that countries donating money will not simply draw funds from allocated overseas aid budgets should also be on the finance agenda in Doha but it is the urgency of finding climate finance for 2013 that takes precedence said Redman.

“We need to see a firm commitment from developed countries around the volume and timetable for scaling up climate finance from now to 2020, and a commitment to specific mechanisms to raise and deliver that money.

“We also need to see Parties moving forward from recognising, to taking action on defining exactly what climate finance is, defining what comprises “new and additional” funding and developing a common platform for reporting how and where climate finance goes,” she said.

SEEN/IPS have been campaigning for the FTT for several years targeting investment bank JP Morgan in particular and were also co-signatories to a letter of support sent to Hilary Clinton.

Recent opposition from developed countries via the US at a UN workshop in Bonn, and separate concerns from developing nations via the Philippines this week, have knocked some of the air out of its sails.

At the second long term finance workshop organised by the UNFCCC in Cape Town this week, Bernarditas Muller from the Philippines delegation said that the FTT would be split to fund projects in several sectors, making it an unpredictable source of climate finance.

At the first UNFCCC workshop this year in July, Paul Bodnar from the US State Department raised the issue.

“The FTT is almost impossible to impose globally. The private actors involved would work around the attacks and could erode tax base further by driving activity to offshore havens,” he said.

“Market based efforts to price carbon emissions are promising. We need sources of finance that are linked to emissions,” he added.

This was met with opposition from NGOs including Friends of the Earth US and ActionAid US who wrote in a letter to Secretary of State Hilary Clinton: “Indeed, we urge you to support efforts to enact a financial transaction tax to pay for international public goods at climate change negotiations, the G20 and other important international venues.”

Janet Redman, Co-director, Sustainable Energy & Economy Network/Institute for Policy Studies was a signatory of that letter.

“I understand her position the representative of the Philippines, which is shared by other developing countries, that climate finance from developed countries must be predictable,” said Redman.

“It’s right the developing world wants to see financial obligation fulfilled. Many developing countries have advocated for national budget contributions as the most predictable source, but securing contributions through national budgets can be very unpredictable in different national systems. In the US, climate finance is allocated each fiscal year. It’s an uphill battle to secure this financing every time the question comes up in front of Congress.”

Redman points out that some developing nations, Brazil, Bolivia, Pakistan and South Africa have spoken in support of FTT at previous UN climate summits.

“South Korea just passed an FTT in their own country. For many it’s not so much the mechanism itself that is in debate, as how it relates to the UNFCCC,” she added.

With FTT revenue passing through national governments anyway, Redman argues they would be no more, or less, predictable than a straight forward national contribution, direct from a government.

“Revenue raised by an FTT could be nationally directed to the Green Climate Fund, or it could free up money for international climate finance that would otherwise be used for domestic public needs. The fact is that FTT could be an additional source of revenue that developed country governments use to meet their climate finance commitments.”

Other sources of finance such as carbon taxes and emissions trading schemes provide an incentive to emit less greenhouse gases. The US argument at the meeting in May is that this is the form all climate finance should take.

“I don’t think the most important criteria for choosing innovative sources of finance is whether or not it’s linked to emissions. We need sources of climate finance linked to the scale of the need,” said Redman.

“FTT is the only mechanism that comes close to raising the volume of money needed. Taxes don’t always relate to the things they are taxing, we tax property in the US to pay for education. FTT is one tool among many, and it should complement tools like shifting fossil fuel subsidies, redirecting military budgets and carbon taxes.”

Proceedings from the two climate finance workshops will now be condensed into a report that will be submitted to the Doha summit for consideration by negotiators and ultimately, ministers.