Costa Rica is one of the world’s smaller countries, but in the world of climate change it stands tall.

Former President Jose Maria Figueres is chairman of the Carbon War Room, while his sister Christiana Figueres is Executive Secretary of the UN climate convention, leading negotiations towards a legally binding emissions treaty.

Most impressively of all, Costa Rica aims to be the world’s first carbon neutral country.

It already meets over 95% of its primary energy needs from renewable sources, mainly hydro power, and has set a target to be fully carbon neutral by 2021.

The country is also under threat from the consequences of climate change. According to the UN Development Programme, the Caribbean side of the country could see 35-75% more rainfall in some months, while northern Pacific and central regions could see 15% less.

Many farmers are already noticing the difference. Agriculture is responsible for around 10% of Costa Rica’s GDP. Coffee production generates over $250 million a year.

Cold nights, winds and erratic rainfall have disrupted coffee harvests. There have been positives too – warmer temperatures in some regions have enabled farmers to grow crops at higher altitudes. 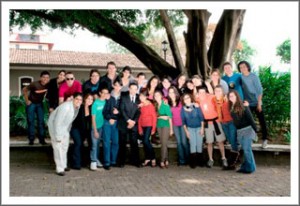 As part of RTCC’s youth series, Alejandra Granados Solis, Project Coordinator for CO2.CR, talks about the collaboration between Costa Rica’s young people and coffee farmers, as well as their role in the climate change debates at all levels.

What is your group doing and what areas do you focus on?

CO2.CR is a group of citizens, led by young people who want to help Costa Rica to become a low carbon and climate resilient economy. I volunteer as project coordinator in CO2.CR and am focused on raising awareness, educating, and empowering youth in the fight against climate change.

Right now, we are working on the evolution of our organization: focusing on improving our strengths and formalizing our organization so that we can manage more ambitious projects in the near future. While we are doing this, we have been working on two main areas: mitigation projects and raising awareness, educating, and empowering the youth against climate change.

We have a strong curriculum of projects:

Project “Route 2021”: a group of Yale graduates and Costa Rican youth entrepreneurs gathered in 2009 to analyse feasibility of the Governments goal to become carbon neutral by the year 2021.

Letters for a Change: in this project, more than 65,000 Costa Rican students sent letters to global leaders to ask for positive actions during the COP 15 climate conference in Copenhagen in 2005.

Project Cancun: this project’s main purpose was to empower young people within the national and international climate change agenda. With the support of more than 200 NGO’s, we were able to get five young Costa Ricans to become the first official youth delegates for the Costa Rican Government during COP 16 climate conference in Cancun.

Carbon Opportunity 2012: an analysis made by more than 30 citizens focused on finding actions with great mitigation potential for the near-future. The project was presented to politicians, diplomats, businessmen and academics.

El Clima está Loco: a flashmob which aimed is to raise awareness about climate change.

A flashmob is where a group of people comes together to perform an unusual act – most often a dance – in a public place. CO2.CR use this act to raise awareness for their work (Source: CO2.CR)

Costa Rica’s National Youth Consultation about RIO+20: aimed to educate the youth sector about the preparatory process promoted by the United Nations, the expected role of governments and major groups, and to initiate a dialogue about the contributions Costa Rica could make to the Conference. It was attended by about 74 young people from universities, NGOs and the business sector, among others.

We have also started dialogue roundtables in partnership with the Friedrich Ebert Foundation to discuss different themes that are important to young people including the green economy, sustainable development and climate change.

For example, last year we had a roundtable about the climate change negotiations. Young people learned about the UNFCCC negotiations, we wrote Costa Rica’s first Youth Position for COP 17, and actually our position on adaptation was included in the country’s own position.

We also did a roundtable about green economy and sustainable development. We invited young people who are leaders in the sector of green economy, and presented 13 proposals on agriculture, forests, climate change, cities, buildings, education, energy, industry, fishing, water, waste, transport and tourism.

Now we are working on a climate change roundtable in order to discuss the youth’s perspective how we can build a low carbon and climate resilient Costa Rica.

As for mitigation, CO2.CR members helped Coopedota, R.L. – a small cooperative of rural coffee producers – in the process of attaining the first carbon neutral certification for coffee in the world. 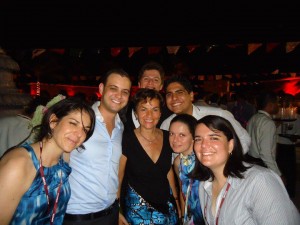 CO2.CR were able to send a group to the COP16 conference in Cancun, where they were able to meet and interview UN climate chief Christiana Figueres (Source: CO2.CR)

Young people are becoming more conscious about how climate change is going to affect us, and the important role they have to play in addressing this global issue because they are the ones who will have to break the paradigm that a country cannot have economic growth and human development without increasing GHG emissions.

What I love about the roundtables we organized is that young people are learning, and questioning everything: Why Costa Rica is focusing on becoming carbon neutral by 2021? Shouldn’t we focus more on adaptation?

So when you put this entire group of young people together to discuss, and give ideas about what kind of country you want in a roundtable, they get empowered, have more information, and the network becomes bigger.

One of our challenges has been managing projects with a very small amount or no funds. So far, we have been able to make a strong impact with our projects on a very tight budget.

Agriculture productivity has also decreased and biodiversity is moving to higher lands.

What would be your vision for 2050? What do needs to happen to get us there?

My vision is a world where we finally understand that the way of life, of consuming without taking into account how we impact others and our planet, is suicidal. A world where we take care more about our natural resources, and decouple increasing the human development index with increasing greenhouse gas emissions. We will still see changes in climate, as a reminder of how far we went, but we must keep working to be resilient.

We need to see a bigger commitment in Doha, at the COP18 climate conference, than the one shown in Durban. The Durban Platform showed countries want to work toward reducing emissions, but that new agreement has to be very ambitious in order to firstly ensure that global temperature rises stay under 1.5 °C; secondly show that all countries will really do their homework and reduce greenhouse gas emissions; and thirdly that the most vulnerable countries will enhance their actions in adaptation.

Parties who play the card of “we need to emit in order to develop”, and who don’t want a legally binding agreement have to understand that the climate crisis puts all countries on a new development pathway that can be compatible with climate protection. 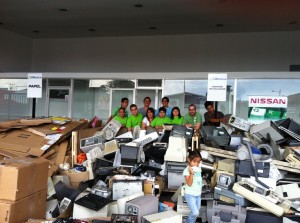 In Durban many developing countries showed support to a legally binding agreement that would include all parties. So maybe working toward this type of agreement, always under common but differentiated responsibilities, will make 2015 a success.

Also the youth constituency (YOUNGO) can play an important and more progressive role by calling for collective and ambitious actions and that “the right to develop” shouldn’t threaten “the right to exist” of the most vulnerable people.

Why did you get involved in the group? What do you think youth groups bring to the debate?

I decided to get involved because climate change is a big challenge especially for young people and future generations. Right now, we are experiencing a decisive moment in which we need today’s leaders to take the right decisions to ensure climate change impacts are lessened, and to turn climate change into an opportunity to address the problems we are already facing like poverty, environmental degradation, youth unemployment and social inequity.

Youth groups can be this energetic machine that can push governments to make the changes needed. We have a lot of information, we can educate ourselves, and others, about climate change and motivate others to take actions and be part of the solution.