Agricultural expansion: an “either or more” factor in deforestation 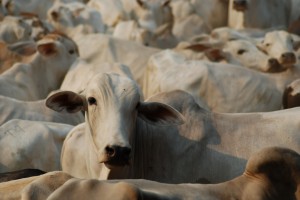 Beef production in Brazil is estimated to be responsible for 60 to 70% of the deforestation in the Amazon basin (Source: acmoraes/Creative Commons)

Pastureland has been identified as the leading driver of deforestation in many parts of Latin America.

But when considering alternative land uses – like the growing of soya beans and oil palm – it’s not necessarily an “either-or” question, says Pablo Pacheco, a scientist with the Center for International Forestry Research.

Much of the land used for agricultural expansion occurs on pastures formerly used for ranching, he said. Those who have been “displaced” often tend to cut down forests in search of new land to till or graze.

So, in terms of sustainable development, Pacheco notes, it’s rarely a question of “do we want more grazing pastures or land for agriculture.”

Rather, he says, the discussion ends up being “either [pasture] or more [pasture carved out of the forest by ranchers that have been displaced by agricultural expansion].”

Instead of arguing about which activity causes more tree loss, policy makers should focus on “a combination of measures to close the frontier and improved land management in already consolidated agricultural frontiers. Higher social inclusion is also required.”

In simpler terms, that means reducing forest conversion in agricultural lands at the edge of intact forest; stimulating higher productivity of crops in these border regions and better cattle herd management; all while ensuring that small-landholders stay in the equation.

Growing global demand for beef and edible oils have bumped arable land under cultivation to a stunning 532 million hectares in recent decades, according to 2010 UN Food and Agriculture Organisation data.

In the roadmap forward, Pacheco says it is important to squeeze the most out of land that has already been deforested.

Take for example, soybean cultivation in the Mato Grosso region of Southern Brazil, bordering the Amazon rainforest. A 2011 literature review points out that 80% of direct deforestation in the region is due to land clearing for cattle rearing and 20% from soy cultivation.

However, a lot of soy cultivation is on already deforested pastureland.

In a recent paper, Pacheco writes about Brazil and Colombia— two countries and crops which constitute the largest acreage expansion in the region. In his paper, Pacheco discusses how oil palm and soybean cultivation tends to expand on pasture lands, thus placing relatively limited direct pressure on forests. However, the benefits tend to be concentrated among large-scale landholders, in the case of oil palm and with medium- and large-scale landholders, industry and trade brokers in the case of soy cultivation.

And this is a problem that needs to be analysed, Pacheco says.

In considering agricultural expansion, it is important to ask whether farmers and ranchers, big and small, are getting the same access to knowledge, technology and capital.

While soybean and oil palm development has brought money to rural parts of Brazil and Colombia, much of that wealth is concentrated among middle to large-scale land holders.

So far, small scale land holders own just 20% of oil palm plantations in Columbia; the rest are large-scale landholdings. In one of Brazil’s major soy-growing regions, Mato Grosso, 77% of soy growing farms is made up of farms larger than 1,000 hectares.

In defence of large-scale plantations, some agricultural economists argue that small-scale operations tend to lead to lower productivity.

“From a conservation perspective, closing the agricultural frontier and improving yield in already converted lands seems important, to the extent that more productive lands could protect forests. But sustainable development is also a social issue,” says Pacheco. “It is not enough to say that small land holders diminish yields. With some technical assistance, these small holders might bring up their productivity.”

“Supporting smallholders, traditional communities, and indigenous people should become a key element for any pathway to sustainability,” he adds. “They have the capabilities to contribute in significant way to food security and environmental stability.”

Melati Kaye is a writer for the Forests News blog at the Center for International Forestry Research (CIFOR).