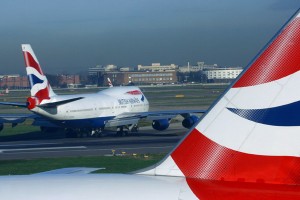 Saudi Arabia has become the latest country to try and prevent airlines from being involved in the EU ETS (Picture Source: British Airways)

The head of the aviation industry’s trade body has become the latest person to speak out against the inclusion of international airlines in the European Union’s emissions trading scheme.

Speaking in Singapore, Tony Tyler, Director General of the International Air Transport Association said the EU was risking a trade war with the USA, China and India.

Reports yesterday suggest Saudi Arabia has become the latest nation to block its airlines from taking part in the scheme. Earlier this year 1,200 airlines submitted data but ten airlines – from China and India – refused to do so. Last month the US  Senate passed a bill preventing the country’s airlines from complying with the scheme.

“The problem is that countries see Europe’s plan as an attack on their sovereignty because Europe will effectively collect a tax for activities in the airspace of other sovereign states and territories,” said Tyler.

“Nobody wants a trade war – certainly not the Europeans. Trade is vital to re-starting their stalled economies… And of course the airlines cannot be caught in a trade war either – as you can see from our weak profitability.”

Air travel have been included in the EU ETS since January 2012. The scheme requires all airline using EU airports, to buy permits for 15% of the carbon emitted over the entire length of their journey.

Opponents argue this is outside the EU’s jurisdiction and say there is nothing it can do to force airlines to pay. Rob Elsworth, Policy Officer at Sandbag, a UK NGO focused on emissions trading told RTCC it was important that the EU remained firm in the face of this mounting criticism.

“I think it is vitally important that the EU remains strong on the issue,” he said. “It continues to have the full support of member states, so there is really not much of a question around this. There are a lot of spins which are put on it I think, certain comments made in certain countries but the EU’s position doesn’t seem to be changing.

“They are also encouraging International Civil Aviation Organisation (ICAO) to come ahead and do something and they are doing. They are acting and they are moving, quicker than they ever have on this issue and you can see they are putting together certain idea and proposals.”

The ICAO – the United Nations Agency covering aviation – say they expect to have a draft proposal on measures to tackle emissions by March 2013.

The agency’s next major meeting takes place from November 19-20, overlapping the UN climate talks in Doha. European Commission Director General Jos Delbeke reportedly said the bloc would consider amending the legislation, but only once the ICAO summit had taken place.

European airlines are already preparing for life under the ETS. British Airways estimate that compliance will cost its parent company €90mn ($110mn) in 2012. Irish airline Ryanair says it will charge passengers 21p extra on every flight to cover the costs of what it brands a ‘looney’ tax.

How opposition from airlines outside the EU will play out is still unknown.

“It is still unclear how [the US bill] will be enforced?” said Elsworth. “Or if it is enforceable? Whether is just the US’s way of showing just how much they object to the scheme and whether it will act as a catalyst? There is a lot which is still unknown.”

“The EU is going ahead with the inclusion of aviation so there is going to be a bill which they are going to have to tally up… Airlines may not pay their fees but they are going to accumulate. How will they accumulate? What will this mean in the long run? That is still under question.”