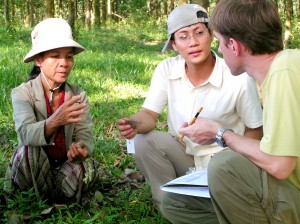 Reducing emissions from deforestation and forest degradation (REDD+), an incentive-based scheme that aims to reduce greenhouse gas emissions by protecting tropical forests, was initially proposed as a ‘Payments for Environmental Services’ system that would make payments from the international level to forest users.

But as REDD+ has moved from an idea into the real world, the challenges have mounted.

“REDD+ as an idea is a success story,” says Arild Angelsen, an environmental economist with the Center for International Forestry Research (CIFOR) and a professor at the Norwegian University of Life Sciences.

Angelsen is the lead author of Analysing REDD+:Challenges and Choices, compiling three years of research on REDD+ conducted by CIFOR scientists.

“It was something genuinely new, and the new key element was that it was based on payments for performance or results. And it was also accompanied by big money.

“We compare it to sustainable development – a nice catchphrase and promising to do a lot. Both ideas have been inspirational for policy-makers and practitioners, but the results so far are not what many hoped for.”

With healthy forests absorbing up to a third of all greenhouse gases (GHGs), and deforestation causing about a fifth of all emissions, proponents saw REDD+ as one of the quickest ways to slow the pace of climate change.

The challenges that have mounted in implementing REDD+ are both practical and political – from how to measure and monitor the carbon emissions that have been avoided by leaving a forest standing, to deciding who should get the money generated by REDD+, to achieving coordination between local, regional, national and international levels of governance.

A recent CIFOR study, published in Environmental Science and Policy, found that 89 out of 99 tropical countries had “very large to medium” gaps between what is required for REDD+ monitoring and the countries’ current capacities.

This means these countries have been providing incomplete and inaccurate estimates of forest loss and GHG emissions.

Responsibility for building robust systems for measurement, reporting and verification (MRV) of GHG emissions is expected to lie with the developing countries themselves – however, most do not have the capacity for this highly technical task, the study found.

“REDD+ is assumed to be a performance-based mechanism and its supporters need to be realistic about what developing countries can do in terms of MRV, at least at this point in time,” said Verchot, who co-authored the study. “The international community needs to commit the human and financial resources to address the gaps in MRV capacity if they want REDD+ to work.”

Where should the money come and go?

However, creating a REDD+ design that benefits every actor and which allows for easy implementation has proven difficult, says Angelsen.

“If you have a system of payments, you could in theory make everybody winners – but in practice, there are two challenges: firstly, we don’t have enough financing to change the fundamental equation and thereby make everyone winners, and secondly it’s very difficult to design a system that will make sure everyone wins.”

A USAID report on Asia’s forests estimates around $130 million is needed per year to effectively manageIndonesia’s protected forests, which are the largest forest areas inAsia. This represents a $30 million-$100 million gap in available resources.

And while pledges for REDD+ have been large – pledges are expected to approach $30 billion during 2010-2012 – funding has been slow to develop for several reasons, says Anglesen.

First, funding has come mainly from international aid budgets rather than a carbon market, which has many implications.

“It means the scheme will need to satisfy more objectives, such as economic development and poverty alleviation. These are, of course, very nice objectives, but it is part of this dilution of the original REDD+ objective, which is to reduce carbon emissions,” he says.

Second, the development of a global carbon market that would pay for all the carbon sequestered in REDD+ projects has been slow to materialise. Three years on from the UN Copenhagen climate conference in 2009, where it was expected that an internationally binding post-Kyoto Protocol climate agreement would prompt major sources of funding through carbon markets, expectations still have not been met, an agreement has not been reached, and the outlook is quite different.

This might have something to do with the commodity price boom since the mid-2000s which led to increased competition for forestland, making REDD+ more expensive. And the global financial crisis in 2008, which distracted attention away from climate change and put pressure on national budgets, probably didn’t help REDD+ funding progress either.

The need to increase coordination

A key premise of REDD+ was a strong national focus, whereby country governments would be the leading actors in forest conservation. But, so far, most REDD+ funding has been awarded to local and subnational project-based initiatives.

“Many of them can be successful projects, but if they become conservation islands in the midst of a jungle of deforestation – that will not make much of a difference,” says Angelsen.

He believes that broad reforms on the national level – including establishing protected areas, the reform of forest concession policies, integrating environmental concerns into road and infrastructure planning, and removing perverse incentives – are important for REDD+, but have been difficult to achieve due to strong opposition from powerful actors who stand to lose.

Some REDD+ countries have begun forging connections between local, national and global actors to counteract the lack of coordination.

The agreement stipulates that the Indonesian government has to draft a national strategy as well as a provincial strategy for the selected provinces.

“One of the major cross-scale links [for REDD+ projects] is between the province and Jakarta,” says Caleb Gallemore, a researcher working with CIFOR in Central Kalimantan.

Central Kalimantan’s government works closely in implementing REDD+ arrangements with the national government via the President’s Unit for Development Control and Monitoring (UKP4), he says.

“This relationship is absolutely crucial, because UKP4 in some ways sees Central Kalimantan as blazing the trail on REDD+, while actors inCentral Kalimantanare careful not to overstep their bounds.”

And while there are still few direct connections between the forest villages and the provincial organisations involved in policy discussions, some steps are being taken to build these links. For example, an sms initiative, www.borneoclimate.info, takes advantage of the Indonesian penchant for text messaging, allowing people to send in reports related to REDD+ via mobile phone.

“The idea is to give people who don’t have computer-based internet access to a platform to make comments about REDD+ issues and, in theory, to monitor abuses,” says Gallemore.

“It’s an interesting effort to use technology to help bridge the village and other scales and help local people become more active agents in the discussion about REDD+.”

Essentially, the complexity of REDD+ requires a multi-level governance system – a concept still in its early stages in environmental policy arenas.

Despite the birthing hiccups, analysts say the scheme has generated interest and excitement about the possibility for getting measures on climate change mitigation moving quickly and cheaply.

Also, the scheme has been developed in such a way that a wide range of actors can find it in their interest to participate.

REDD+ has been through an intensive process of conceptualisation, design and piloting.

Even if it is still far from realising its fundamental goal of large-scale emissions reductions, no idea for saving the world’s tropical forests has generated anywhere near the same excitement and commitment of funds as had REDD+, says Verchot.

Fawziah Selamat is a writer for the Forests News blog at the Center for International Forestry Research (CIFOR).