Leaders of some of the most vulnerable nations to climate change have declared their official position ahead of the UN climate change negotiations in Doha this November.

The Alliance of Small Island States (AOSIS), which negotiates as a block at the talks, is calling for a strong second commitment period of the Kyoto Protocol.

Leaders met last night on the sidelines of the UN General Assembly in New York to finalise the details. 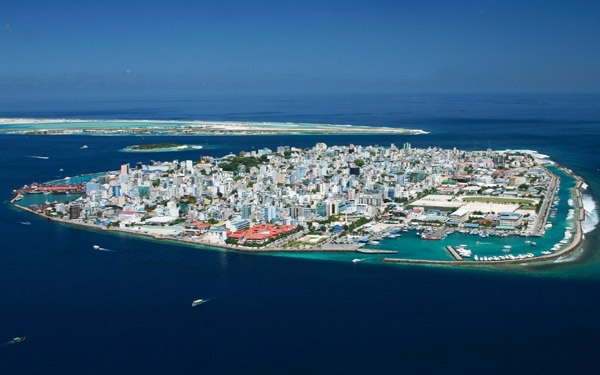 Malé, capital of the Maldives, where the effects of climate change are already being keenly felt. (Source: Flickr/Trodal)

“Climate change is progressing so rapidly, and the current and expected impacts are so alarming, it is absolutely critical that all of the world’s leaders immediately engage in the crisis and begin a serious dialogue about how their countries can specifically begin reducing emissions to the levels science shows is required to avoid a catastrophe,” said President Sprent Dabwido of Nauru, the current chair of AOSIS.

“We need a global response to the crisis at an unprecedented level and that will demand leadership at the highest level,” he added.

They are calling for deeper emission cuts from developed nations, wide participation from rich countries (termed Annex I) and the surrender of at least some of the excess carbon credits currently driving down the carbon market.

AOSIS also wants the second commitment period to run for five years starting in January 1, 2013. The EU argue an eight-year period, with a mid-way review, would offer a continuous commitment until the new global deal commences in 2020.

Others would prefer to see the weaker pledges that they anticipate, locked in for a shorter five-year period.

Some nations have already had to evacuate some of their smaller islands.

President Sprent has been joined by a number of fellow AOSIS leaders in speaking out on climate change during the UN General Assembly’s opening statements.

“There is a discrepancy between what has been pledged and what is necessary to stabilise temperature increase,” said Prime Minister Lilo.

The UN’s Intergovernmental Panel on Climate Change (IPCC) has recommended limiting global warming to 2°C in order to stave off the worst effects. Current pledged emission reductions however, have the world on a pathway to 4°C.