The US State Department has been accused of spreading misinformation about plans for a financial transaction tax (FTT) that could raise $350 billion a year to address climate change.

In a letter to Secretary of State Hillary Clinton, 63 US organisations have complained about comments made by US negotiators during the a UN climate finance workshop held in Bonn earlier this year. 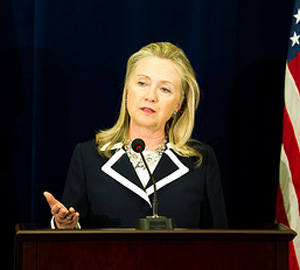 The letter alleges US officials dismissed the FTT, also known as a Robin Hood Tax, as being “impossible to impose” and claimed it would “erode” domestic tax bases by encouraging offshore banking.

The signatories – who include Oxfam America, Friends of the Earth US and Action Aid USA, argue the State Department comments were misleading, as a FTT does not have to be global to work, nor would it automatically drive out financial activity.

They call on the State Department to adopt a more positive attitude to the tax at the second climate finance workshop, which starts on Monday in Cape Town, South Africa.

“While we work very hard to move our own country in a fairer, more just and more ecologically-sound direction, we would ask that you not discourage other countries from supporting this tax as one equitable solution to address the climate crisis, cuts to public services, and widespread job loss faced by their populations.

“Indeed, we urge you to support efforts to enact a financial transaction tax to pay for international public goods at climate change negotiations, the G20 and other important international venues.”

Backers of the Robin Hood Tax say it could raise $350 billion per year in the USA, and £20 billion in the UK. France and South Korea have recently introduced new taxes on financial transactions.

Last week an FTT Bill was introduced into Congress by Democrat Representative Keith Ellison, calling for a 0.5% tax on the trading of stocks, 50 cents on every $100 of trades, and lesser rates on trading in bonds, derivatives and currencies.

At the 2010 Cancun UN climate summit parties agreed to raise $100 billion each year by 2020 to help developing countries deal with climate change – although it is still unclear where this money will come from.

What a Romney-Ryan era could mean for climate change