China and The Netherlands have signed a deal to examine the feasibility of constructing the world’s largest tidal power scheme.

The agreement signed today will look at the potential for a new type of tidal technology, Dynamic Tidal Power (DTP), developed by Dutch engineers. 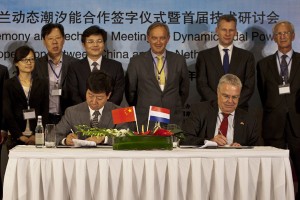 Officials sign the partnership that aims to develop a DTP demonstration plant in China. (Source: POWER)

Part of the agreement is to assess specific, potential DTP sites in China, the UK and South Korea. The Severn Barrage, a traditional tidal scheme in the UK, has courted controversy because of the environmental consequences of its construction.

The dams can run for more than 30km out to sea with enough turbines to generate electricity for 3 million Europeans.

The tide runs high and low on either side of the dam simultaneously, switching sides with the tidal cycle. Turbines built into the dam turn as the high tide waters flow through to the low tide side (see video below).

“Global political debates on energy typically focus on existing forms of renewable energy,” de Boer told RTCC. “There are limited opportunities to gain support for promising new technologies like DTP, although the United Nations Sustainable Energy for All initiative, which was launched in Rio+20, has been helpful in putting this technology in the global spotlight.”

A demonstration plant will be constructed to evaluate the suitability of the technology for the Chinese market, however preliminary evaluations found South Korea, the UK and China to be the most suitable regions for DTP.

The Dutch government has provided more than €2m for the POWER consortium to further investigate its potential in partnership with Chinese research partners.

“I am confident that these joint efforts will lead to DTP being demonstrated in the coming years, and that full-scale Dynamic Tidal Power will become a reality in the coming decade,” said Hans Moll, Director, Strukton Engineering, and Chairman of the POWER consortium.