Ban Ki-moon has accused governments of opting out of climate action despite being aware of the potential dangers.

“The severe and growing impacts of climate change are there before our eyes – yet too many people in power seem wilfully blind to the threat,” said Ban.

“This is a time of turmoil, transition and transformation – a time when time itself is not on our side. 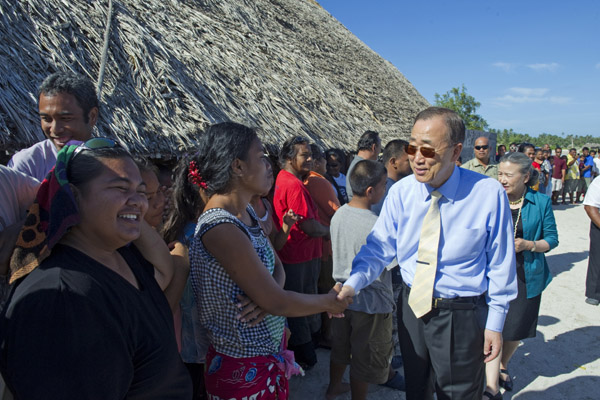 “Last December, Member States agreed to reach a legally binding agreement by 2015. Now, you must make good on this promise. Time is running out on our ability to limit the rise in global temperature to 2°C,” he urged.

“Changing course will not be easy. But to see this as only a burden misses the bigger picture. Sustainability and the green economy offer compelling opportunities to promote jobs, growth, innovation and long-term stability.”

President Christopher Loeak of the Marshall Islands said that while his country had little means to fund its climate adaptation efforts, it would do what it could.

“The growing realization that, however, wrongful, we must finance some of our own adaptation efforts is perhaps the most compelling reason to rapidly expand our private sector,” he said adding that it was time for more cooperation between the developed and developing world.

“The time is now over for endless North-South division and the all-too predictable finger pointing must end.”

Low lying small islands are at risk from rising sea levels and increased storm surges which increase coastal erosion and taint freshwater supplies with sea water. Some nations have already had to evacuate villages from smaller atolls, although mass migrations have been ruled out for now.

“Small islands may be the canary in the coalmine, but we are all staring a global catastrophe right in the face,” he warned.

“If multilateralism is to have any credibility, then we must move to an emergency footing and those countries with the greatest capacity must immediately begin mobilising the significant resources necessary to remake the energy infrastructure that powers the global economy,” said President Dabwido.

Leaders from Brazil, Serbia and Slovakia also raised the challenge of climate change during the session.

Lithuania meanwhile called for access to energy not to be used as political blackmail.

There are a number of climate change related events in New York to coincide with the UNGA meeting this week including the launch of the DARA Climate Vulnerability Monitor and Climate Week NYC.

Ban Ki-moon outlines goals for Sustainable Energy for All project