Green roofs have seen a surge in popularity in recent years as cities look for ways to limit the impacts of climate change.

Green roofs – also known as living roofs – are where the top of a building is partially or completely covered by vegetation and a growing medium, planted on top of a waterproofing membrane.

In Herne Hill, South London – where localised flooding has been a problem, the Urban Wild Project aims to improve the local area by encouraging local businesses to install green roofs.

A before and after shot of the Herne Hill roofs, put together by an artist to show what they could look like at the end of the project (Source: Urban Wild Project)

I spoke to Caroline Noble and Katy Obregon about what gave them inspiration for a green roofs project on this scale.

Caroline Noble (CN): It all started with an idea to respond to climate change by installing green roofs on as many businesses in Herne Hill as we could.

Normally people are approaching this kind of thing as individuals, greening their shed roofs or, on the other end of the scale you have companies putting them on big buildings in London. It is one of the first times a project of this size has been attempted at a community level in the UK.

RTCC: What have you achieved so far?

CN: I think the biggest achievement has been getting so far in such a short space of time. It has been a real challenge to communicate with so many people with different levels of interest and understanding. Addressing everyone’s issues has been key. We had a public meeting where a green roof expert explained the benefits of living roofs and dealt with concerns that people had.

We now have such a large number of people interested in the project that we have had to put together a website, as a way of providing information and updates.

The community has been incredibly supportive and the whole thing has snowballed. We are now hoping to install more than 30 roofs. 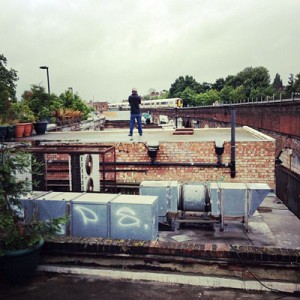 The Herne Hill roofs run alongside the railway line, and people will be able to see the living roofs from the passing trains (Source: Urban Wild Project)

Katy Obregon (KO): Despite a lot of support from shop owners, it is essential to get the freeholders who own the leases to approve the project also. Without it, greening Herne Hill roofs can only ever be a dream! Ensuring freeholders understand how living roofs might benefit them as a business, is a crucial aspect to this project because they’re not always based in the community. Many people don’t know what living roofs are, or about the services they provide. For example savings on energy bills, increased roof lifespan and reducing damage caused by flooding.

So far we are happy to say that the responses from the freeholders have been encouraging!

CN: In the background to all this is the London Plan by the Greater London Authority which talks about urban greening as a way of dealing with climate change. It specifically mentions green roofing, so the political will is there. There is also funding out there for the right project and we have managed to get enough so far to complete the first stage.

RTCC: What have been the challenges so far?

CN: I think it has been coordination. I don’t think either of us realised how big it would get and just how fast. To coordinate that many people – we are dealing with shop owners, freeholders, surveyors, council and the community in general. We just didn’t anticipate the level of work which would be needed and how hard it would be to fit it in around our daily lives. We’ve had to take a more systematic approach to allocating time to the project.

We now need to make sure we are in the right place organisationally. So we have had to set up a board and sort out all of the bureaucratic nuts and bolts. That has been quite a steep learning curve!

KO: We have been awarded £2000 from the Timberland Earthkeeper’s Grant, which we are using specifically to connect the community with the project. We are organising living roof workshops for people who want to green a roof that can be enjoyed by their community, so, for example a school roof like a bike shed, or perhaps a shed on an allotment.

Some of the money will go towards research being carried out by a PhD student investigating the social benefits of green roofs.

One of the issues is not being able to see the roofs to enjoy them. Our aim is to find ways to make the inaccessible accessible! We are buying time lapse cameras and we’ll feed the information back to our website so people get the chance to watch the roofs in action. This will be especially exciting when David Perkins and the team from Roots and Shoots begin building habitats to encourage wildlife to move in.

CN: There have been all sorts of spin-off projects. We are currently trying to get funding for an art installation which is specifically designed to encourage community interaction with the roofs. 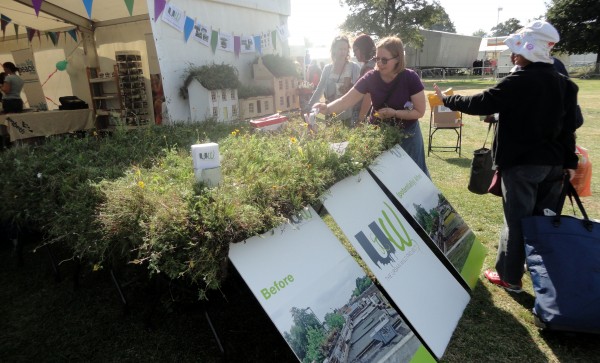 Using a large piece of green roofing, the group were able to use the Lambeth Country Show to spread the word about green roofing (Source: Urban Wild Project)

We also recently had a stall at the Lambeth Country Show in Brockwell Park outside the Cooperative Council tent. Lambeth have been very supportive of our attempts to publicise the project and we are now the proud owners of new display boards! A company donated a large piece of green roofing which was covered with wild flowers and stopped everyone in their tracks and we ran a workshop for children, green roofing shoeboxes with mustard and cress.

KO: People have been very generous with their expertise and time putting together leaflets, logos, films and photos…. Herne Hill as a community seem to be as excited as we are about the project!

RTCC: How much support have you seen from the local council?

CN: There is a lot of talk at the moment about the Big Society and the importance of community-led projects and certainly, Lambeth Council has been very interested in the project from the start. One of their sustainability engineers gave us a lot of good advice which helped us secure our first lot of funding.

It can be difficult to know who to talk to in the council because it can be such an amorphous blob but the Green Community Champions team have been very helpful and we are now on their mailing list and are building connections with lots of great people and projects.

They have more of an overview of what is happening across other London boroughs too and I think they have been really excited by the scale of the project and the level of community cooperation. 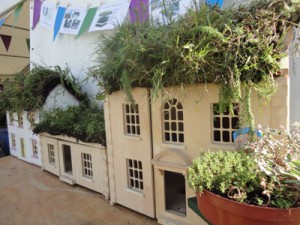 RTCC: Why did you get involved in the project?

KO: I spend a lot of time reading and worrying about the state of the planet! What gives me hope is getting up in the morning knowing I can do something about it.

CN: I loved the idea. I am fascinated by all things horticultural and the idea of making an urban space a little greener really appealed to me. We also work really well together which makes all the tricky stuff a little easier.

KO: It’s just as well we’re having so much fun as our to do list keeps on exploding!

RTCC: What advice would you give to anyone wanting to set up a similar scheme?

KO: If you have an idea and you are on your own, tap straight into what’s already out there. I think if it’s the natural world you want to protect you won’t be alone for long. There’s a well established network in place full of people supporting our environment in an extraordinary number of different ways. We’ve found it refreshingly easy to access expertise and support. I think it’s because people are passionate about protecting biodiversity and mitigating climate change.

My advice? Let your love for the planet drive you and enjoy the ride!

CN: Nothing ventured nothing gained! Even if your idea seems too big or too difficult there’s nothing to lose so just send that email or make that call… I have been constantly amazed by the people we’ve met. People who aren’t cynical, who want to give something back and who are happy to help. There’s a network out there of community minded people who are trying to bring about positive change and it’s a great thing to be a part of.