Ban Ki-moon outlines goals for Sustainable Energy for All project

World Bank president Jim Yong Kim will serve as co-chair of the newly formed Sustainable Energy for All policies (SE4All) advisory board.

Dr. Kandeh Yumkella of Sierra Leone, currently the Director-General of the United Nations Industrial Development Organization (UNIDO) and Chair of UN-Energy, will serve as Ban’s Special Representative for SE4All and Chief Executive Officer (CEO) of the new UN initiative.

SE4All was one of the biggest recipients of voluntary pledges at the Rio+20 summit in June from governments, NGOs, business and international organisations including funding totalling almost $50bn. A further commitment of $5bn over five years was also announced.

The SE4All programme was established in the build-up to the Rio+20 summit and aims to increase access to energy while adhering to low carbon policies whenever possible. 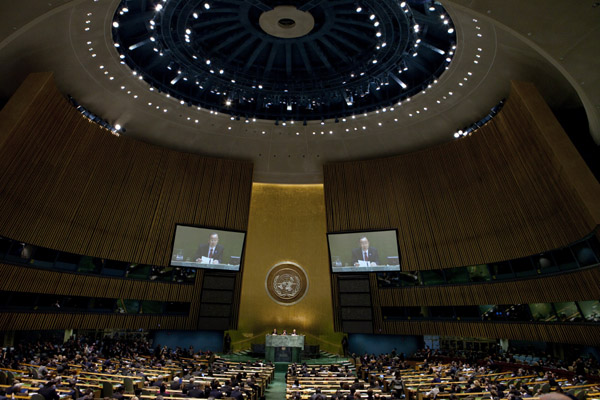 “Providing sustainable energy for all could be the biggest opportunity of the 21st century,” said Ban. “Sustainable energy is the golden thread that connects economic growth, social equity, and a climate and environment that enables the world to thrive.”

Philips also revealed it would install 100 “light centres” in rural Africa providing illuminated areas that could allow a number of community activities to continue after dark in area with little to no access to electricity.

The announcements comes during a week of climate-related events in New York coinciding with the General Assembly.

The latest DARA Climate Vulnerability Report will be released during the event. The Climate Group is also holding Climate Week New York and several governments including Germany and Qatar will be holding events too.

Congratulations to Kandeh Yumkella, the new CEO of #SE4All! $50bn to bring electricity to $300m people by 2015. bloom.bg/Sh9X4r

Is achieving Ban Ki Moon’s ‘energy for all’ goals possible?

Ban Ki Moon: Rio+20 was a success and leaves a concrete and lasting legacy