The EU has been urged to take stronger action on the HFC family of greenhouse gases by the Environmental Investigation Agency (EIA).

The EIA argues that firm European regulation to cuts HFCs (Hydrofluorocarbons) can not only send a strong signal to developing countries where their use is growing, but also help create a mass market for their replacement chemicals.

HFCs were developed to replace Chlorofluorocarbons (CFCs) which were largely responsible for the hole in the ozone layer. They can be thousands of times more potent than CO2 when it comes to warming the atmosphere but do have a far shorter lifespan.

“HFC emissions are still growing rather than reducing and by 2020 they could be 80% higher. The emission of HFCs is probably on a par with the aviation industry as a proportion of greenhouse gas emissions worldwide,” Alasdair Cameron, Global Environment Campaigner with EIA told RTCC. 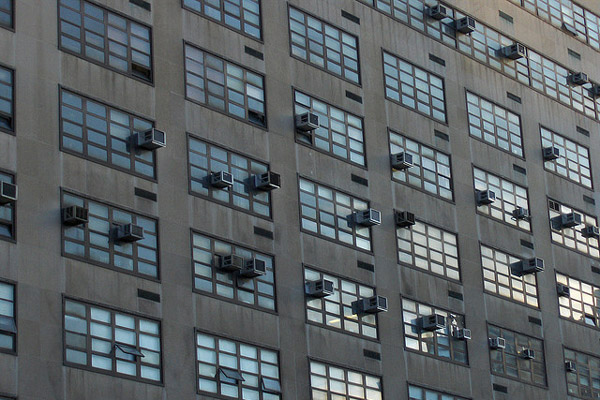 The increasing use of air conditioning is a factor in the anticipated 80% rise in HFC emissions by 2020. (Source: Flickr/Joe Shlabotnik)

HFCs are used in air conditioning and refrigeration units. The industry is experiencing rapid growth as middle classes in developing countries emerge, and as temperate climates suffer increasingly extreme summer temperatures, expanding the air con market. Air conditioning sales in India and China are growing at 20% a year.

The EU’s policy on HFCs is currently up for review and the EIA believes there is an opportunity to lead by example and begin an aggressive phasedown of HFC use. HFCs could soon be managed under the Montreal Protocol, which famously banned CFCs, but talks in that forum are deadlocked.

“The growth of air conditioning could be catastrophic for the climate. Ambition at the EU can kick-start Montreal and create a mass market for better, cleaner air conditioning units,” said Cameron.

An EIA report to be launched in Brussels tonight suggest 20 sectors in which HFC could be banned by 2020.

Montreal Protocol: What can UN climate negotiators learn from the ozone treaty?

WWF issues warning on US plan to target non-CO2 emissions

Cameron does not believe emissions trading is the correct platform for dealing with HFCs due to their high potency, and corresponding high value. A tonne of HFCs could be worth thousands of dollars, even on today’s deflated carbon markets.

Instead he points to HFC tax regimes in Denmark and Switzerland as a more suitable mechanism. Replacement chemicals already exist but face resistance from industry that would be left with the costs of any changeover.

HFCs and other so-called short lived climate forcers such as methane and soot, have received increasing attention in recent years.

“There has been a wariness from some environmental groups to focus on things other than CO2 as its creates opportunities for less structured, long term solutions for climate change.

“Some countries use it to shift blame onto developing countries, so rather than dealing with their own factories they will point to inefficient cookstoves. That attitude is changing now and people realise that you can work on both, short term forcers and CO2 emissions,” said Cameron.

“Focusing on short term forcers isn’t necessarily a delaying tactic, it can be about buying more time to establish the long term deals needed for CO2 emissions.”

The US established a coalition of countries to deal with short lived climate forcers in developing countries earlier this year. France, Germany, Italy, Denmark, Finland, Jordan and the UK joined the Climate and Clean Air Initiative in July, bringing the total number of signed-up states to 21.

The United Nations Environment Programme (UNEP) predicts that slashing these emissions could delay climate change by up to three decades, avoid the annual loss of more than 30 million tons of crops and prevent 2.4 million deaths – often from soot inhalation.

These pollutants have a shorter life-span in the atmosphere than C02, but UNEP estimates they contribute 25-30% of current emissions that are affecting climate change.