The US insurance industry racked up losses of $34bn during 2011, according to a new report.

The Ceres sustainable investment coalition said the losses are the largest in a single year since 2005.

Extreme weather triggered widescale drought, wildfires and tornadoes in the West and Central States while the East coast was battered by storms and flooding. 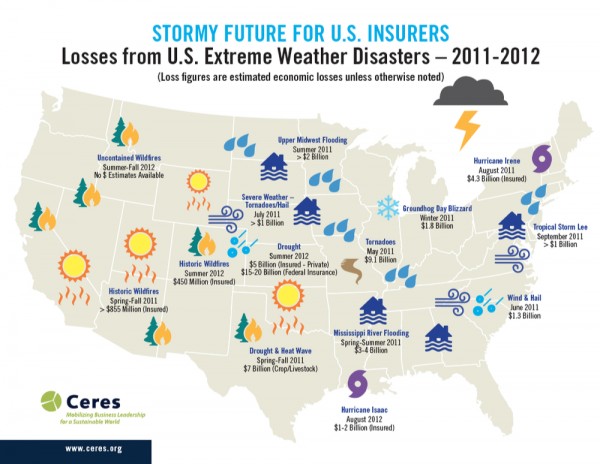 The report outlines evidence linking climate change to the extreme weather and makes suggestions on how the industry could buffer itself against the increasing risks.

“Insurance is the first line of defence against extreme weather losses, but climate change is a game-changer for the models that insurers have long relied on,” said Washington State Insurance Commissioner Mike Kreidler, who contributed to the report. “Companies will need to adapt if insurance is to remain available and affordable.”

“Just as the insurance industry asserted leadership to minimize building fire and earthquake risks in the 20th century, the industry has a huge opportunity today to lead in tackling climate change risks,” said Mindy Lubber, president of Ceres.

US droughts this summer have driven up food prices while extreme weather has also caused hundreds of deaths.