New York is the stage for a week of climate change debate starting at the United Nations General Assembly on Monday.

The annual gathering brings together 123 world leaders, with a series of official and unofficial side events focusing on climate related issues. 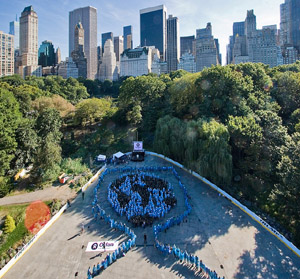 A climate wake up call for New York arranged by Oxfam and tcktcktck in 2009. (Source: Flickr/Avaazorg)

On Monday, UN Secretary General Ban Ki-moon will make an announcement about his Sustainable Energy for All programme.

The High-Level panel addressing the post 2015 development goals, which is chaired by the leader of Liberia, Indonesia and the UK, will meet for the first time on Tuesday.

An event focusing on the security situation in the Sahel region is expected to dedicate some time to the effects of climate change on Wednesday.

The report will highlight climate-related concerns, including carbon-intensive development and climate change impacts, as one of the world’s most serious health threats, drivers of humanitarian disasters, and a principal impediment to development, especially for countries already struggling to attain key international objectives like the Millennium Development Goals.

Qatar, the next host of the UNFCCC climate change negotiations will host an event titled “Water and Food Security: Innovations for a Changing Climate” on Thursday, perhaps offering a nod to the theme they may choose to focus the UN Conference of the Parties’ negotiations later this year.

The tiny but oil-rich country said during the Rio+20 summit that it was keen to share its solar powered desalination technology with other nations tackling water shortages.

On Friday, Germany will further develop issues raised at a meeting of the UN Security Council on climate change last year.

The Clinton Global Initiative will also host its annual meeting with energy and sustainable development on the agenda, with events taking place on Sunday, Monday and Tuesday.

Finally, the Climate Group has organised Climate Week NYC to coincide with the UN meet-up. Events covering food, energy, economics, policy and culminating in the Cleanweb Hackathon that will see teams given 28 hours to design and develop working apps that address resource use.