Is the Arctic’s loss Antarctica’s gain?

There has never been a better time to be a polar expert.

The focus is on the two poles like never before, especially after reports this week that sea-ice at the Arctic had reached a record low.

But as websites and news agencies pumped out this alarming headline, others called for calm. Arctic loss was being matched by Antarctic gain they said – this was actually a question of ice redistribution rather than ice loss. 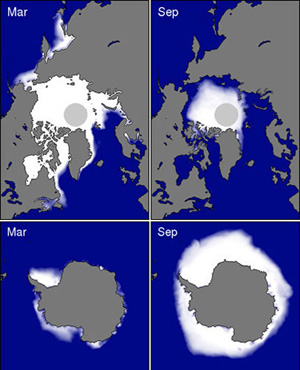 Take the Real Science blog, where Steven Goddard argues that cooling in the Southern Hemisphere could be balancing the warming the North: “Antarctic ice is nearing an all-time record high, and is above average everywhere”, he writes.

It’s a compelling theory, and one that has gained traction on Twitter and blogs, but much less so in the world of polar science.

We checked in with some experts to check up on this claim – and it’s fair to say they seem less convinced.

“The sea ice extent change in the Arctic and the Antarctic do not cancel each other out,” Professor John Turner from the British Antarctic Survey told me.

Yes, the Antarctic sea ice has seen an increase he said. According to NASA, it has increased by about 1% per decade since satellite records begun.

But Turner and NASA both say that the areas of sea ice increases in the Antarctic vary significantly.

“Across the Southern Ocean the greatest increase in sea ice extent has been in the Ross Sea, with smaller increases around the coast of East Antarctica and in the North East Weddell Sea,” Turner said. “There has been a marked decrease in ice extent just to the west of the Antarctic Peninsula.”

But is does seem odd that in what we understand is a warming world, ice anywhere can be increasing. But again, scientists say we should not be surprised.

“Antarctic sea ice hasn’t seen these big reductions we’ve seen in the Arctic,” Mark Serreze, director of the US-based National Snow and Ice Data Center told the LiveScience website, adding that they had expected the Antarctic to be more robust to the changing climate.

Turner explains that there are a number of reasons why this might be.

“One possibility is that it is a result of the ozone hole, which is believed to have caused a small cooling at the coastal stations around East Antarctica,” he said. “But it could also be a result of natural variability of the climate system.

“We don’t have the data to allow us to determine how sea ice extent would vary if forcing factors such as stratospheric ozone, greenhouse gases and aerosols were all kept fixed.”

Some explain the difference in melt levels by observing that the Arctic is ocean surrounded by land, while the Antarctic is land surrounded by ocean.

Serreze says the Arctic responds much more directly to changes in air and sea-surface temperatures than the Antarctic – which in turn is governed more by wind and ocean currents.

Another theory, published in a 2010 edition of the Proceedings of the National Academy of Sciences‘ journal argued that ocean warming in the 20th Century has boosted precipitation over the Antarctic region – which has fallen as snow.

This snow made the top layers of the ocean less salty and less dense, preventing warm currents in the deep ocean rising and melting ice.

What does the future hold?

Turner says that if the world maintains its warming trends, there is an inevitability around the Antarctic losing sea ice.

“By the end of the century, if greenhouse gas concentrations double, we expect that there will be one third less Antarctic sea ice,” said Turner.

As greenhouse gases continue to warm the atmosphere and the oceans of Antarctica, some scientists expect the precipitation in the region to turn from snow to rain, rapidly melting snow and ice.

Experts warn us we should beware playing the Arctic and Antarctic against each other. The environments are not directly comparable.

In Antarctica, sea ice grows extensively during the winter, and melts rapidly in the summer. This is very different to the Arctic, where sea ice lasts all year round – with relative increases in winter and decreases in summer. The Antarctic is often referred to as one-year, or ‘young’ ice, whereas Arctic sea ice is built up over many years.

In effect there is a feedback system in operation. As sea ice melts, the exposed darker water beneath absorbs more sunlight, heating the water. In the Arctic, where levels of sea ice are falling, more ocean is revealed, and more sunlight absorbed.

In the Antarctic, the sea ice virtually disappears each summer (December to February). So unlike the Arctic, the amount of ocean revealed to the sun does not increase year on year, and therefore the process does not have a pronounced affect on the Earth’s temperature. If the ice were to start disappearing in the winter that would be a different story.

The really significant question in the Antarctic concerns the extent of land ice.

It it the potential melting of this that raises alarm around the world – because unlike sea ice, it would contribute to sea-level rises.

Increasingly attention is being turned towards the stability of the Antarctic’s ice sheets. UN climate chief Christiana Figueres visited the continent earlier in 2012, and explorer Ranulph Fiennes is planning an expedition in 2013 which will supply more data from Antarctica’s bleak interior.

That’s for another day – but if you’re interested NASA gathered data from Antarctica earlier this year – you can read about the results on their website and check the accompanying info-graphic below. 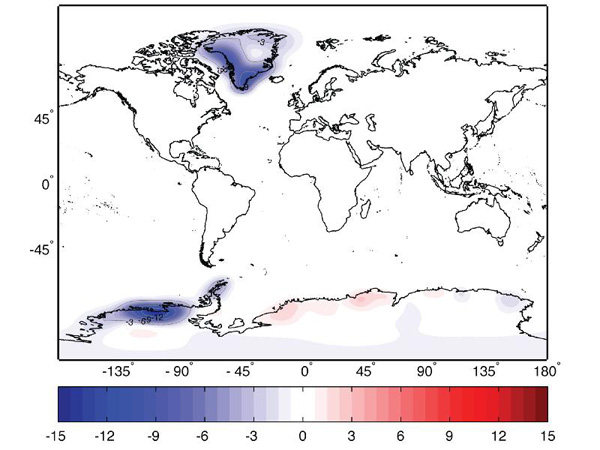 NASA: Average yearly change in mass, in centimeters of water, during 2003-2010, as measured by NASA’s Gravity Recovery and Climate Experiment (GRACE) satellites, for just Greenland and Antarctica and their peripheral glaciers and ice caps.