Clean energy represents a route to economic recovery, according to former US President Bill Clinton.

Weighing in on a debate in the USA that is becoming increasingly polarised between Republicans and Democrats as the Presidential elections approach, Clinton says growth and environmental protection go hand in hand, citing examples from both sides of the Atlantic.

“Germany, where the sun shines on average as much as it does in London, reportedly set the world record for electricity generated from the sun in a single day: 22 gigawatts, or roughly the output of 20 nuclear power plants.”

This week a variety of legislation has been presented by Republicans in Washington DC designed to protect the coal industry from environmental regulations and attempts to limit greenhouse gas emissions, which they characterise as ‘Obama’s War on Coal’. 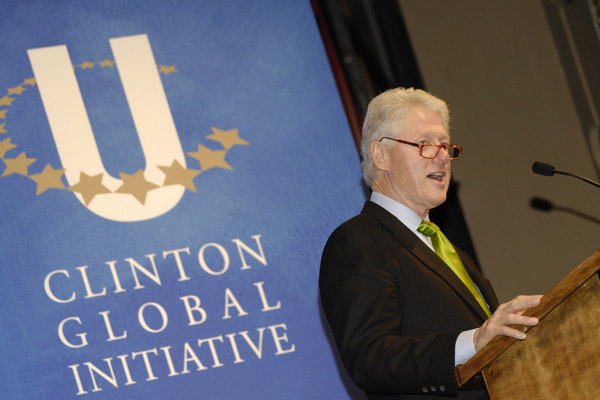 President Clinton has identified the clean energy sector as a good route out of the economic downturn. (Source: Flickr/Clinton Global Initiative)

Clinton said the US has wrongly labelled renewable energy as “expensive” and should take comfort from the experience of European nations.

“The clean-energy sector in the US was actually growing by 8.3% before the economic slowdown, more than twice the rate of the overall economy. In fact, those European countries meeting their Kyoto Protocol commitments have been among the least hard hit by the economic crisis, including Germany, Denmark and Sweden.

“If sustainable energy were bad economics, Costa Rica wouldn’t be one of the richest countries in the region, with what is arguably the greenest economy in the world,” he argued.

He also praised Brazil for balancing its development of oil and gas resources with the expansion of hydropower.

The main subsidy for renewable energy in the US expires at the end of this year with the outcome of November’s election likely to decide its fate beyond that.

Republican nominee Mitt Romney has said he will not renew the Production Tax Credit (PTC) while President Obama has pledged to keep it going.

Suzlon: Wind power soon to be cheaper than fossil fuels