Britain’s self-styled greenest building has opened its doors, providing London with its first centre dedicated to the sustainable development of cities.

I was given a tour of ‘The Crystal’ by its owners Siemens yesterday, who are keen to show off its green credentials – they claim it uses 50% less power use and 65% less CO2 emissions than comparable office buildings.

A stone’s throw from the Olympic Park – ‘the Crystal’ is a striking 6,300 square meter glass covered structure, overlooking the Thames and sitting alongside London’s new cable car service.

It comes with a hefty price tag attached – £30 million – but offers an attractive, futuristic vision of the type of city we could all one day live in. Inside, it’s a green version of Dr Who’s Tardis – propelled onto a planet where technology and nature complement each other.

Taking a year and a half to build, the Crystal will house it first conference this week, the UN Habitat Conference (Source: Siemens/Edmund Sumner)

Speaking at the launch, Peter Löscher, Chief Executive of Siemens AG said: “Cities are the engines of the world economy and also have the greatest impact on the environment. The development of our planet will stand or fall with the development of cities.”

The Crystal is located in the city’s “Green Enterprise District” which spans six East London boroughs and is expected to create 6,000 jobs in the area.

But does it live up the title as one of the world’s most sustainable buildings? 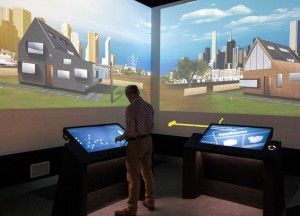 – The steel structure is made up of purpose shaped beams, which vary in weight and length. This limited the amount of steel required while still providing a strong frame.

– Windows at the top of the building operate automatically allowing fresh air to ventilate the building.

– The glass panelling and insulated roof make use of natural light and heat, creating its very own ‘Greenhouse effect’. In other areas the glass is angled away from the sun to allow for self shading.

– A ground source heat pump generates 100% of the building’s heat and a proportion of its air conditioning.

– It has received the highest level of LEED (US) and BREEAM (UK) scores for environmental design.

Siemens have aimed to make the building’s own green credentials a part of its sustainability exhibition. Live monitors display how much energy has been both produced and consumed each day.

With a mix of photovoltaic and solar thermal panels cladding the building’s roof, the company says it should create on average 20% of the building’s own electricity. 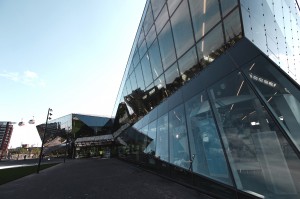 The building will also be a hub for the company's Infrastructure & Cities Sector (Source: Siemens/Edmund Sumner)

With the Crystal still not at full capacity, and a fairly sunny day outside, the monitors showed me that nearly 35% of the electricity required had been generated by the panels.

Roland Busch, CEO of Siemens Infrastructure and Cities said: “We did have discussions about making it energy neutral but we also had to consider the budget. We wanted to make it as energy efficient as possible within this and we feel we have created a good balance.

“We used a concept which used as much renewable energy from solar and heat piping as possible to make it the most sustainable building we could. As far as we know this is the only one of this standard.”

Over 44% of the water consumed by the building on its opening day was recycled and treated blackwater – that’s waste water from toilet flushing and sinks that could contain food particles, faeces and human body fluids. Another 24% was sourced from from captured rainwater.

Everything about the Crystal, from its shape, position and the landscaping outside, has been used to optimise the use of natural elements in both fuelling and regulating the temperature of the building.

Siemens say the aim of the project is to showcase not only the technologies of the sustainable cities of the future but also those that are available today.

Not everyone has £30 million to splash on a fancy new building – but as energy prices rise and the threat of climate change intensifies – it’s useful to know big business has a plan.

Quirky buildings in the capital apparently have to have odd names. Add ‘The Crystal’ to the Shard, Gherkin and the London Assembly’s Glass Gonad. They are all fairly iconic constructions in their own right and if Siemens can do the same for green building, that would be something to shout about.

A picture of Sustainability: What does green living mean for London?