The EU and China have announced details of a deal that will see the two work together on a series of environmental and climate change projects including the design of a Chinese carbon market.

The total European financial contribution may only be €25m over a four year period but the EU’s role in the development of a Chinese emissions trading system could bode well for the future of the bloc’s own carbon market. 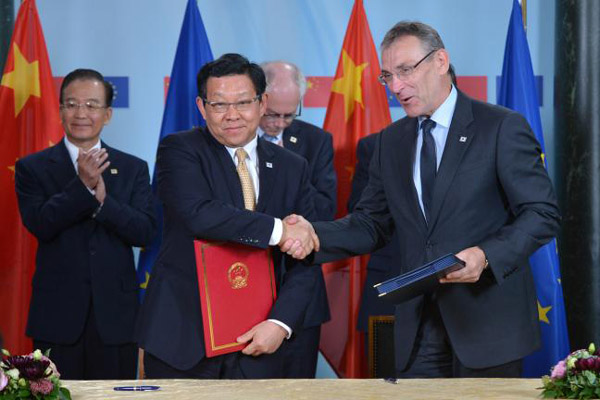 “Needless to say that it makes a significant difference when now also China wants to use carbon markets to reduce emissions cost-effectively and boost low-carbon technologies. This is a huge opportunity to modernise our economies, stimulate growth and create jobs in new dynamic industries with innovative technologies and clean energy,” she added.

The EU will also help establish pilot projects in waste, water and sustainable urbanisation to help the Chinese government to reach its targets on carbon intensity reduction.

The deal was signed by European Commissioner for Development, Andris Piebalgs, and Chen Deming, Minister of Commerce of the Republic of China.

China is the largest overall emitter of greenhouse gas emissions largely as a result of its sheer size. Its emissions per capita rank it at 72nd globally behind Thailand, Azerbaijan and Mexico.

The country has already started developing seven regional pilot programmes and the help from the EU could signal an acceleration towards a nationwide Chinese trading platform.

Collaboration with a Chinese carbon market would be a welcome boost to the EU Emissions Trading System (ETS), which saw prices drop to a record €4.99 per tonne of CO2 this April.

Any future link up between the EU and Chinese trading platforms would be made easier if the two systems had similar designs.

At the UNFCCC climate negotiations in Durban last year, China broke from its previous position and said it would consider making legally binding emissions targets through the UN, on the conditions that all countries did the same.

The shift was a major contribution to the signing of the Durban Platform, the first fragile step towards a global deal on greenhouse gas emissions.