Speaking to Radio Australia, President Anote Tong of Kiribati said while they were not in any immediate danger, preparations were underway in case the situation deteriorated in the decades to come.

“We are considering all possibilities and we’re not discounting the possibility that in time we will not only relocate within the country but it will be necessary to, I think, relocate in a country outside our border. It will become an option, as a last resort,” he said.

“There haven’t been a great number of offers coming forward but I’m very happy to say that a number of Pacific countries have come forward. East Timor has made a concrete offer and we’ve yet to discuss that in more detail.” 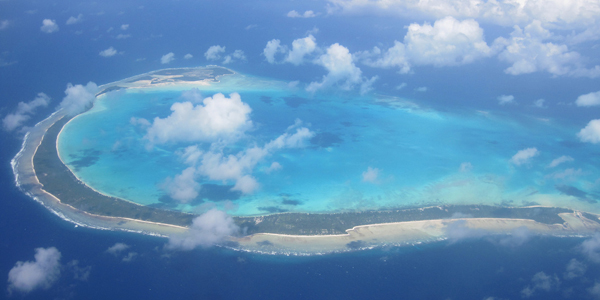 Tong says the rise in temperatures which will result from greenhouse gas emissions to date will already have a significant impact on the country (Source: Rafeal Avila Coya/Creative Commons)

Tong, who won the 2012 Hillary Laureate award for raising global awareness about the effects of climate change on Pacific Nations, said the country’s current strategy focuses on educating Kiribati’s 100,000 population so they have the necessary skills to migrate on merit.

Kiribati is made from 32 coral atolls – including the Gilbert Islands, the Phoenix Islands and the Line Islands – and the majority of the country sits less than 2 meters above sea levels. At their lowest point the atolls are level with the sea.

A 1989 UN report cited Kiribati as one of the countries likely to completely disappear in the 21st century from rising sea levels.

The Intergovernmental Panel on Climate Change’s (IPCC) Fourth Assessment Report, predicted sea-levels to rise between 18 and 59 cm by the end of the century.

These predictions, however, came with a caveat that they did not include the potential impact of Greenland and Antarctic ice sheet melts on sea levels. Modelling on how these ice sheets will react to rising temperatures is still very complicated.

In 2009, two years after the IPCC report, scientists at the climate change congress in Copenhagen said changes to these ice sheets had the potential to double previous estimates and put sea level rises at a metre or more by 2100.

One metre is generally cited, as the most agreed upon prediction for sea levels, although this varies in both directions.

A one metre sea level rise would leave many of the Kiribati islands under water, and encroaching seas are already a problem experienced by the country.

In 1999 two uninhabited coral reefs sunk below the sea. Tong says some households and communities have already had to leave their homes, either from sea level rise itself or from soil erosion.

“The most severe impact [of climate change] is the waves and the ocean on the shoreline,” he said. “We’ve had some villages that have had to be totally relocated. There have been a number of villages now that have had similar problems with intrusion of seawater into the fresh water ponds affecting food crops”.

“I think more frighteningly it’s an increasing phenomenon and that is, I think perhaps the most worrying factor.”

Rio+20: Life on a Pacific Island