Kyoto Protocol: How is the UN’s flagship climate project faring ahead of COP18?

After a turbulent two weeks for the Kyoto Protocol and carbon trading schemes in general, the future of the UN’s flagship policy remains in the balance.

Plans for a second period (KP2) of legally binding reductions in greenhouse gas emissions are advanced but serious questions surrounding its likely effectiveness and environmental integrity have now emerged.

There is a realistic hope that Australia, New Zealand and Ukraine will make binding pledges along with the European Union, although Russia denied it would take part last Friday, branding the system “useless”.

The Protocol remains toxic for the US and Japan’s switch away from nuclear power to fossil fuels makes it more unlikely to sign up than ever. Major emerging economies like India and China are exempt.

An essential part of Kyoto is the Clean Development Mechanism (CDM), which allows wealthy nations that have signed up for binding pledges (Annex I countries in UN jargon), to invest in low carbon projects in the developing world, is said to be on its knees.

Its one billionth tonne of offset carbon just over a week ago coincided with a fairly pessimistic appraisal of its future. It has “essentially collapsed”, in the words of Joan MacNaughton, a former top UK civil servant and vice chair of an advisory panel.

And it’s the current state of the CDM that concerns even the Protocol’s most ardent fans. 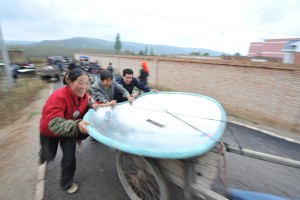 CDM projects range from cutting emissions from factories to distributing clean solar cookers like this one in North West China. (Source: UNFCCC)

Globally, carbon markets are suffering from an oversupply problem. This makes the financial incentive to cut carbon low and has left many countries with an abundance of carbon credits.

Now, as governments discuss how to make KP2 an effective tool for reducing emissions, there are concerns that both the chronic oversupply and insufficient demand will render the whole agreement pointless.

“The future for the CDM is bleak,” says Tomas Wyns, director at the NGO CCAP Europe. “The High Level Panel of the CDM has suggested emergency measures that you could compare to the bailout of the financial sector.”

The idea of the CDM is that the market incentivises countries to hit their targets and by investing in poorer nations, emission reductions projects deliver even more bang for their buck.

However, the recession reduced CO2 output meaning Annex I parties got closer or exceeded their targets without the CDM or any other carbon trading platforms, reducing the demand for credits drastically. Many countries now have huge surpluses of credits and so no incentive to reduce their emissions.

“Some are calling for public money to flow into the CDM to keep it alive. Those are interesting ideas but the money needed to keep it going just by buying up credits runs into tens of billions of dollars,” Wyns told RTCC.

“The future is quite uncertain. The private sector will be needed too but my perception is that it will be linked to public money.”

Carbon trading generally assigns a number of emissions allowances. Each credit represents a tonne of CO2. Any excess credits can be traded.

A report by CDM Watch and Reuters Point Carbon has estimated that by the end of KP2, which will be either 2017 or 2020, the surplus of carbon credits, Assigned Amount Units (AAUs) will reach 17.2 bn tonnes of CO2. To put that into perspective, that’s more than the EU emits in five years.

Governments are debating what to do about the surplus at the UN climate change talks. Those carrying them (Russia, Ukraine and Poland have the most) are reluctant to let them go. As long as they remain in circulation however, carbon markets will continue to suffer. 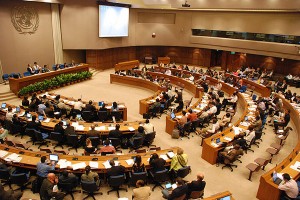 The Bangkok talks made good progress on the Kyoto Protocol's extension with the G77 proposal on cutting the carbon credit surplus gathering momentum. (Source: Flickr/UNFCCC)

At the most recent meeting in Bangkok, the G77+China group of developing countries submitted a set of ideas for discussion in Doha, that would phase out the surplus credits.

They want the surpluses to be removed from carbon markets and instead held in reserve. This could boost the long suffering carbon price by sorting the over supply problem, even if there was also the possibility that countries struggling with targets could dip into their “savings”.

The proposal also suggests that after KP2, when a new global pact on emissions cuts replaces it, the surpluses would be ditched.

Finally, it suggests that countries whose emission targets are higher than actual 2012 levels would see the difference in their unambitious goal sliced off their reserves of credits.

“This reduces the resultant KP2 surplus and effectively increases the ambition levels,” says Wyns. “The proposal is really interesting because it is carried by the G77 group, which is very influential.

Analysis: Was enough achieved at UN climate talks in Bangkok?

“There were previously three proposals from the Alliance of Small Island States (AOSIS), Africa Group and Brazil but now they have all come together. That puts some pressure on the likes of Russia and the EU to agree on this in the Doha talks at the end of the year.”

The announcement by Russia that it has no intention of taking part in KP2 could have some positive side effects.

As the largest holder of surplus AAUs and with plenty of diplomatic clout, it is one of the main obstacles to an agreement on what to do with them.

“At the UNFCCC it is mainly the EU position that has been missing for an overall solution to be found,” says Ulriikka Aarnio, senior policy advisor, Climate Action Network Europe.

“Now that Russia has confirmed that they will not be joining the KP2 I hope this also makes it easier to agree strict limits on the carry-over and use of surplus credits,” she adds.

Wyns believes it is now possible that Russia’s non-inclusion in KP2 could see its surplus declared void and its access to the Kyoto carbon cutting mechanisms reduced.

Something better than nothing?

As negotiators enter the final months of preparation before the Doha climate talks in November, any doubts on the establishment of a second commitment period have eased.

But KP2 in any form is not good enough. The EU is on track to meet its emission reduction targets but is unwilling to make deeper cuts without signs that other nations, through Kyoto or otherwise, will also make a bold gesture.

The scale of surplus credits available could effectively render KP2 completely impotent if not dealt with.

A global deal on the climate, scheduled to be agreed by 2015 and in force by 2020, hinges on rich countries putting a second commitment of Kyoto in place.

A lame duck KP2 would set the bar dangerously low as developing nations prepare to negotiate their own reductions.

Low ambition jeopardises carbon markets, lowers the bar for emerging economies, derails the good work that a rejuvenated CDM could do and makes the goal of limiting warming to 2°C even more unlikely.