Montreal Protocol: What can UN climate negotiators learn from the ozone treaty?

The ratification of the Montreal Protocol was one of the international community’s finest hours. Faced with a clear and present danger, states united to cut the emission of dangerous gases that threatened a vital part of the planet. Politicians listened to the science, and despite strong and well-funded protests from the aerosol industry they agreed to sign a treaty phasing out their production. In 2009, the Vienna Convention and the Montreal Protocol became the first treaties in history to achieve universal ratification. Given the current state of the UN climate talks – it’s worth reflecting on how this came about.

In June, the international environmental community gathered at the Rio+20 UN Conference on Sustainable Development set for hard-fought negotiations on sustainable development. This occurred with the backdrop of decades of questionable progress on global environmental issues like deforestation, biodiversity and climate change.

Old hands lamented the missed opportunities and false dawns in the years since the 1992 Rio Earth Summit. Rio+20 needed to be a turning point — seen as a once-in-a-generation opportunity to find a new paradigm for sustainable development and kickstart a transition towards ‘green growth’ [1]. But while Rio+20 marked the marquee environmental summit of 2012, another much quieter – and perhaps more significant – anniversary takes place in a few days’ time, one that does much to tell us about the environmental malaise that we find ourselves in.

Some five years before the 1992 Rio Earth Summit, a smaller agreement was taking shape in Montreal on regulating chlorofluorocarbon (CFC) emissions, judged to be the cause of ozone depletion. Known as the Montreal Protocol, September 16 marks its 25th anniversary. During the busy years of negotiations running up to the Earth Summit, the Montreal Protocol loomed large in the minds of negotiators and environmentalists for the simple reason that it was judged to be a success. 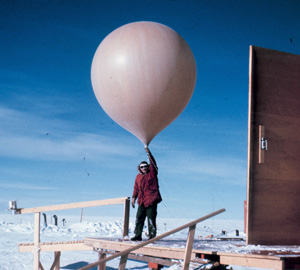 In the 1980s monitoring of the ozone layer produced the first clear-cut evidence of the impact human activities have had on the global atmosphere (Pic: NOAA)

A follow-on agreement, the 1990 London Amendment, paved the way for China and India’s participation in the nascent ozone regime, boosting the Montreal Protocol’s reputation as well as wider hopes for progress on global environmental issues at the upcoming Earth Summit. Montreal’s perceived success meant that diplomats turned to it for guidance in the design of new environmental agreements – and its imprint, for better or worse, can be clearly found in the shape and structure of the climate change regime.

Stuck on the same tack

Over the past decade, the climate negotiations have seen repeated attempts to shift the emphasis of discussions to non-universal settings – the George W. Bush-initiated Major Economies Meeting being a key example. He invited just seventeen countries with high net emissions. The tumultuous 2009 Copenhagen conference seemed at the time to spell the end of a UN-centred framework to organise international climate mitigation efforts in favour of smaller and narrower institutional settings. But little changed.

Minor successes at the past two conferences, in Cancun and Durban, have reinforced the political consensus that the UNFCCC-centred process is the only game in town. Scholars have variously described international climate efforts as constituting a ‘regime complex’ and as an example of ‘fragmented governance’ on overlapping scales and actors[3]; but governments continue to focus on a process premised on universal participation. This started with Montreal.

The main efforts of governments continues to focus too on a top-down structure of climate governance, guided by a ‘targets and timetables’ approach that mirrors the Montreal model. This sets the goal of international negotiations in a framework of overarching quantitative targets to reduce emissions and agreement on timetables to meet these.

In his recent book, “Global Warming Gridlock” [4], David Victor portrays this as one of the worst lessons in designing the Framework Convention that diplomats drew from the Montreal Protocol – the result of a “herd mentality” in the past design of international atmospheric agreements that all followed this same design principle. The complex political economy of climate change, he argues, makes a targets-based approach overly rigid and costly.

In reality, governments have more leverage by focusing on setting prices through carbon taxes. But time and time again, the suggestion of a bottom-up structure that focuses on specific policies and measures rather than overarching targets has been rejected. The underlying principle guiding international negotiations continues to work towards agreeing a long term global target to limit warming to 2°C – and working backwards to divide up and distribute mitigation burdens in meeting that target.

Developing countries, for their part, have drawn heavily from the Montreal Protocol’s funding instrument, the Multilateral Fund, in their thinking about climate finance. Established to fund the incremental costs of phasing out ozone-depleting substances in developing countries, the Multilateral Fund’s governance model was unique among international funding institutions for its double-majority procedure enabling not just equal industrialised and developing country representation, but separate majorities of each group in the event of a vote.

The US viewed the new fund warily for fear of setting a precedent for future negotiations. In a way, the climate negotiations since have justified its fears: in the two decades since, developing countries have continually clamoured for a new climate-specific funding institution, dissatisfied with the World Bank’s involvement in the Global Environmental Facility that has served as the Framework convention’s financial mechanism.

They frequently point to the Multilateral Fund as a plausible alternative model. Indeed, the recent establishment of the Green Climate Fund over the past two years, intended to govern an anticipated $100bn a year in climate finance flows by 2020, can be read as the fulfilment of this long-standing aspiration for wresting finance oversight away from existing institutions — especially the World Bank.

As the old proverb goes, imitation is the sincerest form of flattery. The diplomats who negotiated the Framework Convention began not with a blank sheet, but with the lessons from what they saw as a resoundingly successful set of negotiations to address a global atmospheric problem. These lessons, in turn, have provided a guide to two troubled decades of climate negotiations, enshrined as its founding norms and principles.

As the Montreal Protocol marks its 25th anniversary – the UN Day for the Preservation of the Ozone Layer – its legacy lives on, tugging and pulling at the sleeves of international efforts to address climate change.

Nicholas Chan is a DPhil student in International Relations at Oxford University. You can read his blog, Nick and the World.