One of the world’s fastest growing economies, China is its biggest emitter.

In its latest five-year plan, the country set out national environmental targets including increasing non-fossil fuel energy by 11.4%, reducing energy consumption by 16% and CO2 emission per unit of GDP by 17% by 2015.

According to the 2011 Global Trends in Renewable Energy Investment report, China is also the world’s largest investor in renewable energy projects.

While a new coal fired power station is said to come online in the country every week, the country also erects a new wind turbine every two hours.

On the global stage, however, China is often painted as one of the villains of the UN climate negotiations, unwilling to accept any limitations on their emissions.

Earlier this week UK negotiator said that getting China to agree or sign up to a new global deal will be on the biggest challenges at Doha. 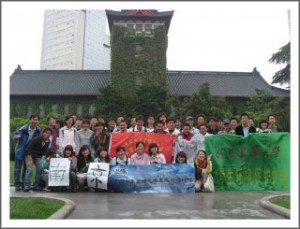 On the ground in China, young people are coming together to put pressure on the country both to act locally and globally on climate change.

As part of the RTCC youth series, I spoke to Cao Yuan, International Director of the China Youth Climate Action Network about the work they are doing.

What are your group doing and what areas do you focus on?

We have an international youth summit on energy and climate change which we co-host with the top two universities in China. The three organisations together host the summit every summer. We have also organised the COP Youth delegations that have been to the International Climate Change negotiations every year since COP15.

We have low campus project where we try to get the youth on campus to measure the carbon emissions and the energy efficiency on campus and try to find out ways to reduce that. We do a lot of research on Campus.

For the summit we invited all kinds of speakers from government, from companies and from all different kinds of organisations. We have workshops and on site activities. So we have all kinds of youth coming together to attend this meeting. It lasts three days and we talk about everything from green buildings to clean technology to youth participation into the UN system.

I think the most important thing is about the youth awareness on climate change. So from the beginning when our organisation started to now I see more and more people, especially the youth that care about climate change and want to do something about it. I think that is the best result we can witness.

Also the Chinese youth are more and more active on the international stage as we are now able to attend different international events, and know how to present ourselves to let the world hear our voice.

What challenges have you faced in your work?

First of all we a youth organisation so we don’t have too much work experience and we have to figure out how to do things by ourselves. Also another challenge is the youth, typically, have not decided on their career, so when they walk into an organisation they might do some volunteer work or something, but then they will eventually have to go to work so it makes out organisation changeable – people move from here to there.

What support have you seen for your work? 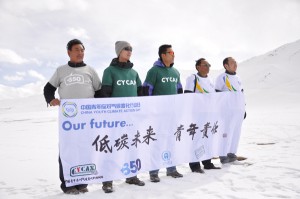 The group work with other large NGO organisations (Source: CYCAN)

We receive a lot of support in the form of financial support from foundations. Bigger established NGOs like WWF, those kinds of organisations have helped us a lot.

We have also seen some individual support. Some people who are not even in the climate change and environmental protection field hear about our actions they are very moved and encouraged and they love to give us financial support.

What impacts of climate change are you already seeing in China?

I think the most important impact of climate change on China is that the climate has become more and more dramatic. In some places it used to be really really cold and it has turned out to be really hot.

In some places we get heavy rains which flood the cities. We have also started seeing really really harsh snow in the southern part of China where we don’t usually see snow. It is really really weird. That is some of the impacts of climate change.

I think that in 2050, for the negotiations from my personal view I would say it is very hard to achieve a universal agreement on climate change and the carbon emissions limit and all kinds of stuff, the only possible solution for it would be some kind of regional collaboration.

I have attended COP15 and COP17 and I learnt how the UN process works and I really think that for the climate change problem, sometimes the only visible solution might be more locally based rather than international law. 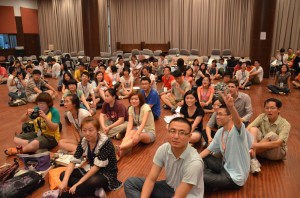 CYCAN organise a yearly summit to help equip young people with the skills they need for climate action (Source: CYCAN)

I think for China there will be a real shortage of energy supply for our energy problem so I think China will have to choose to develop in a greener way because – maybe even if China doesn’t care about the climate change impact – it has to consider its energy problem.

I once did a study comparison on the energy of the US and China. China faces a much more serious challenge than the US, as we can see. So I think China has to do something. Maybe not on a international level because it is hard for a developing country to commit that much but I think that at least China in its own country it will have to try all kinds of means to do this in the future.

What would help your group move forward with your work?

I would say more training about how to do all kinds of work, and how to do the NGO work, especially in China where the NGO environment is not very good, especially for inexperienced youths.

I think what we need is systemic training on how to do the marketing, how to do our actions, how to deal with all kinds of organisations in China, how to apply for the funding from international resources.

This will require good people with professional experience. That is what we most need.

Why did you get involved in the group? What do you think youth bring to the debate?

At the very beginning I did not know anything about climate change until a friend asked me to do some translation work for him and I did. And through that work I found out that climate change involves everything. 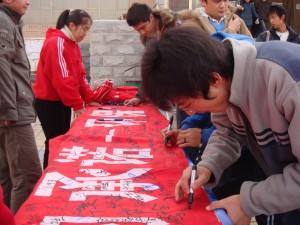 The group have sent delegations to the COP climate meetings since COP15 (Source: CYCAN)

It is about energy, about politics, economics, and I found that they are interrelated. It is very interesting because I think clean energy should be the future of our world and I think this is a very promising issue and yet I didn’t see too many young people in China who cared about this issue and so I joined this organisation.

I want to make more Chinese youth hear about this and to get to know about this and then maybe in the future, whatever career path they take, they can be involved in some way.

In the international negotiations with other NGOs, people could easily think they stand for the government or for some sophisticated group. They are more likely to trust the youth. And in this way we are better communicators for the NGOs amongst all kinds of players.

When we want to do promotional activities, youth are very good at influencing others I think, as we care about our future and when we talk about this from our view and our own perspective people are more likely to think yes this is the youth’s future.