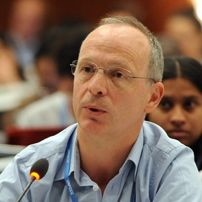 The window of opportunity to ensure global warming is kept to below 2 degrees (2C) is getting smaller, a leading European climate negotiator has admitted.

The 2C target was agreed by 141 countries at the 2010 Copenhagen UN talks. Many climate experts believe rises in temperature beyond that level will lead to runaway and potentially devastating climatic changes.

“We are very clear that existing ambition is not enough, we are not on a 2C trajectory and we need to do more,” he said. “The reason we are not doing more is ultimately political conditions in many of our partner countries in the world.

“That’s why we secured an agreement in Durban along with the small island states and the LDCs that there would be a process to raise the level of ambition between now and 2015.

Betts acknowledged that his USA counterparts are feeling increasingly uneasy about a binding global deal, with negotiator Jonathan Pershing arguing at the recent Bangkok round of talks that the 2C target was too inflexible for an effective agreement to be reached.

The EU is open to US suggestions to reduce the emission of harmful greenhouse gases outside the UN climate convention (UNFCCC). Betts cited the G20, Montreal Protocol and private sector as possible forums for new actions.

But he insisted the UK and the EU are firmly committed to reaching a binding deal within the UN framework in 2015, however challenging the politics might seem at present.

“We are very clear that a legally binding outcome is best, and not because we fetishsize about a legal agreement,” he said.

“In the end it’s the climate goal that is important, but because it’s the highest commitment that governments can make, it gives confidence to other governments and it provides a framework for accounting so we know that a tonne is a tonne.”

How to draw the world’s largest producer of greenhouse gases into a binding deal is one of the major issues the UN negotiations currently face.

Betts admitted that the 2C goal was a “sensitive issue” for China, and suggested the EU was keen to work with them to help reach an agreement.

“China is doing a lot but the numbers suggest they would need to almost do more than anyone else to meet that goal,” he said.

“I think they would say privately that it’s not clear how they are going to do that, so thinking about how we can build the mechanisms and political conditions for countries like China to make those reductions is important.”

At the same event UK energy and climate change minister Greg Barker admitted he had no great hopes for a huge breakthrough at the forthcoming COP18 meeting in Doha given the current global political climate.

In particular Barker said uncertainties over the future leaders of China and the USA meant it was unlikely any major deals would be signed, but he is hopeful that the Kyoto Protocol extension can be agreed, which he acknowledged was “incredibly important and emotive”.

“If you’re interested in the dark arts of diplomacy and negotiating then the COP (annual Conference of the Parties) is for you, but we remain optimistic that while there was pushback earlier in the year in the first meeting post COP in Bonn – that always happens – there have been some interesting signals in Bangkok,” he said.

“I don’t want to sound like I’m issuing an optimistic clarion call because I don’t for a moment underestimate the difficulties, but it’s not impossible and given the number of people in the climate change world who say it is, it’s important to bear that in mind.”