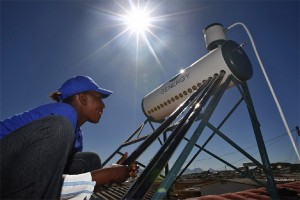 The one billionth certified emission reduction credit under the Kyoto Protocol’s Clean Development Mechanism (CDM) will be issued today, according to the UN climate secretariat (UNFCCC).

The credit will be given to Greenply Industries in Rajasthan, India’s ‘largest interior infrastructure company’.

Under the CDM, projects that reduce greenhouse gas emissions in developing countries earn one credit for each tonne of carbon dioxide reduced. This effectively means that it has now prevented the emission of a billion tonnes of CO2 into the atmosphere.

“This exciting milestone is a testament to the expanding use of the CDM,” said UNFCCC Executive Secretary Christiana Figueres.

“The CDM is not only having an important impact on developing countries through technology transfer and sustainable development, but it can also encourage developed countries to increase their emission reduction targets by making mitigation more affordable.”

Greenply Industries has switched its fuel source from coal and oil to locally gathered biomass, reducing Co2 emissions by 17.475 tonnes annually, the equivalent of removing 3,100 passenger cars from the roads every year.

The CDM allows states to meet their own emission targets by investing in cheaper carbon reduction schemes in the developing world. There are now more than 4,500 registered projects in 75 countries worldwide.

UNFCCC Interactive Map: Where can I find a CDM project?

During the recent UN climate talks in Bangkok, more than 130 of the world’s poorest countries aimed to pressure richer states into signing up to an extension of the Kyoto Protocol (KP2) by insisting that those who did not could not have access to the CDM.

“They can forget about them (CDM credits),” Least Developed Countries (LDC) chairman Pa Ousman Jarju told RTCC. “If you don’t want the Mango tree you should not go in for the fruits.

“They will not benefit from the flexible mechanisms of the Protocol.”

Russia’s business community appear to have taken this threat seriously, with reports yesterday that they have lobbied President Vladmir Putin to sign up to KP2.

Yuri Fyodorov, the co-chairman of a working group from Business Russia said: “The second Kyoto Protocol commitment period is in the interests of Russia and Russian business and will enable active participation, including in the establishment of a global international agreement.”

Does the CDM work?

Questions persist over how effective the CDM has actually been in cutting global carbon emissions.

In 2008 David Victor, a leading carbon trading analyst at Stanford University in the US, argued that as many as two-thirds of the supposed “emission reduction” credits being produced by the CDM from projects in developing countries were not backed by real reductions in pollution.

Since then the UNFCCC say work has been done to ‘safeguard the mechanism’s environmental integrity’ and establish ‘standardized emissions baselines against which projects can be judged and emission reductions assessed’.

“Our goals remain to ensure environmental integrity, improve efficiency and clarity and bring the benefits of the CDM to all developing countries,” said CDM Board Chair Maosheng Duan.

“Huge strides have already been made in these areas and the Board will continue its efforts to improve the CDM to make it increasingly attractive to the current and many emerging emissions trading systems.”