China, India and other big emerging economies should be asked to make major emissions reductions just like the US and Europe, a former climate change negotiator has said.

Pablo Solon, who headed the Bolivian delegation at the UN climate talks in Cancun in 2010, has called for those pursuing consumption-led growth to be held to the same responsibilities as wealthy nations that have already attained high emission economies.

The call comes as the current round of UN climate change talks approach their conclusion in Bangkok. 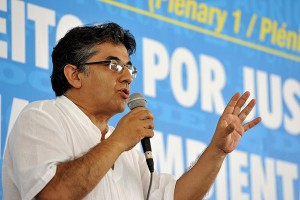 “We should demand that China, India, Brazil and South Africa also agree to mandatory cuts without offsets, although of course, these should be lower than the Annex 1 [developed as of 1990] countries,” he wrote in the Bangkok Post.

The UN climate process currently requests binding commitments to reduce emissions through the Kyoto Protocol for rich countries alone. A new global deal to be finalised in 2015 and in force by 2020 will require all nations to reduce their greenhouse gas output.

“In reality US and China both want a weaker climate agreement. The US because their influential politicians and corporations are not committed to deep real cuts. China’s leaders realise that the longer they can put off a legally binding agreement, the better for them since China will rank top in greenhouse gas emissions in a few years and a weak agreement will be in its interest.

“We can no longer tolerate a situation whereby the United States and China portray themselves as opponents but actually provide each other with the rationale to pursue their environmentally destabilising greenhouse-gas-intensive economic trajectories.”

He also called for rich countries to commit funding to combat climate change and to raise their ambition on emissions reductions to 40-50% by 2020. The EU’s current target is 20%.

Solon objected to the Cancun Accord at the end of the 2010 talks but his concerns were ignored and the document was approved.

He is now Executive Director of the Bangkok-based research and advocacy organisation Focus on the Global South.