Australia is on the frontline of climate change.

One of the driest continents on earth, it is exposed to the dangers of drought and wildfires, while many of its major towns and cities are based along the country’s coastline,  under threat from flooding and sea level rises.

It is also home to some of the world’s most famous natural habitats including the Great Barrier Reef, the Tasmanian Wilderness and the Wet Tropics of Queensland.

And the country has been hitting the headlines recently for its climate change policies.

Last week the Federal Government announced its carbon trading scheme would be linked with the existing scheme in the EU – amid rumors this could be the country’s first step towards preparing for a post-2020 climate deal.

Meanwhile, despite the opposition party saying it would not object to the country signing a second commitment period of the Kyoto Protocol, the government have yet to announce their involvement. 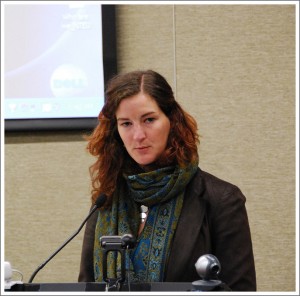 As part of RTCC’s Youth Series I spoke to Ellen Sandell from the Australian Youth Climate Coalition.  We talked about mobilising youth across Australia, lobbying the government and re-powering Port Augusta.

At AYCC our mission is to create a generation-wide movement to solve the climate crisis. We empower and mobilise young people to take action on climate change, as young people will still be around to feel the impacts of climate change if our leaders fail to act now.

Our past projects have included several PowerShift summits, where we brought together thousands of young people to learn about how they can take action on climate change in their communities.

In 2010 we held a huge election campaign where we talked to tens of thousands of voters on election day about the climate policies of each party – and received national media coverage with our mascot ‘Ellie the Elephant’ who followed Juilia Gillard and Tony Abbott around the campaign trail, asking them to disclose their climate policies.

At the moment we’re working on a huge campaign to get Australia’s first solar thermal plant built in Port Augusta, South Australia. Currently the town has two dirty coal power stations, which are shutting down. This is an incredible opportunity to replace them with solar – but we need State and Federal Government support to make this happen.

We’re putting this issue on the national stage in September when over 100 AYCC volunteers will walk 325km from Port Augusta to Adelaide’s Parliament House over 14 days, to make this a national media issue.

We’ve brought together an Alliance of community groups, the Port Augusta council, research groups and others to make this campaign a success.

In the last five years AYCC has grown to over 80,000 members online, over 500 active volunteers and 100 local AYCC groups across the country.

We’ve had many wins during that time – we contributed to a price on carbon getting through Parliament, and to overturning Rob Oakeshott’s motion that would see native forest burning counted as renewable energy.

We put climate change back on the agenda during the 2010 election with our ‘climate elephant’ mascot following Gillard and Abbott around the campaign trail – receiving national media attention, and finally getting journalists and politicians to start talking about climate change again. 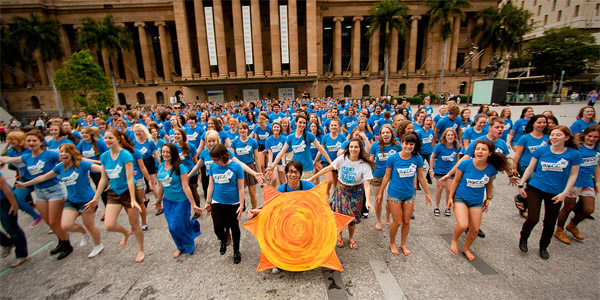 The group brings together groups from across Australia to put pressure on the government for climate change action (Source: AYCC)

And we’ve created change at the local level. Over 50 local businesses have been ‘Repowered’ with energy efficiency and solar power by AYCC’s local groups.

But we have something that our enemies do not: we have people power and a movement fighting with us for a better, brighter future. That’s what constantly gives us hope.

What support have you seen for your activities

We’re so lucky to receive great support from generous donors, as well as from other organisations in the climate movement.

The climate movement in Australia is so collaborative, and we often work together to achieve big outcomes. We’re also pleased to have a number of high-profile ambassadors on board, such as Jess Watson, the youngest woman to sail around the world.

Australia is actually one of the countries that is the most vulnerable to the impacts of climate change – even though we’re a developed nation.

We’ve had some horrible natural disasters recently – such as the 2009 Black Saturday bushfires which killed nearly 200 people, and the catastrophic floods in Queensland. While we can’t attribute one particular event to climate change, we know the trend is for these kinds of events to increase, which would be devastating.

We’re also already seeing sea level rise in places like the Torres Strait, which are under huge threat.

We want to see all countries take on zero emissions targets and reach them so we can get to below 350ppm (parts per million – on average the Co2 concentration in the atmosphere rises by two parts per million annually).

Although we know this starts with domestic action – rather than wait for an international treaty, all countries should get on with the job of climate solutions, and then come together globally. Just like Australia has, by taking the first step with the carbon price. It’s not enough, but it’s a start. 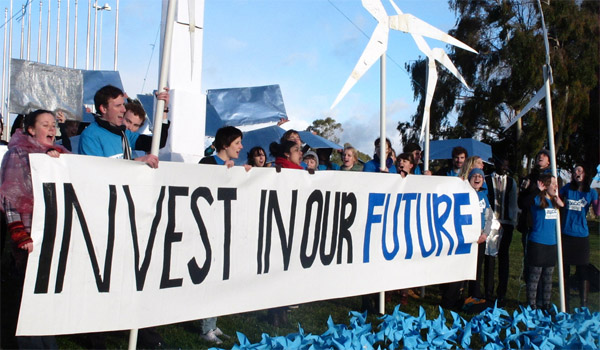 We always need more funding. We have a plan in the next five years to grow to 5000 active volunteers around the country, who are powerful enough to make sure our leaders take strong action on climate change.

In order to do this, of course we need money, to help pay stipends for our key organisers and to cover travel and materials. Donations are always very welcome!

Why did you get involved in the group? What do you think youth groups’ role is in the climate/environmental agenda?

I got involved in the AYCC because I believe we need a movement to solve this issue. We need bureaucrats, policy researchers, technical people – we need everyone.

But we won’t get anywhere unless we have a movement of people all demanding change from our leaders, and holding them to account.

Social movements throughout history have historically been led by young people, and that’s why I think we play a really important role in the movement. We’re bold, we’re not afraid to do big, risky things, and we have the moral voice.