A key goal of the 2012 Bangkok climate talks is to establish exactly how the Ad Hoc Working Group on the Durban Platform for Enhanced Action (ADP) can proceed.

It’s a tortuous process as the new negotiating stream overlaps with discussions that have been rumbling on for the past decade, with little or no results.

But with 2015 the agreed deadline for a deal – the pressure is now on – and there have been a variety of interesting and often confusing suggestions put forward in Bangkok.

“We heard a lot of countries recognising that the old divisions between developing and developed countries are breaking down,”  Kyle Gracey from SustainUS told me.

“There was much more dialogue on how, under the ADP, an agreement should apply to all countries, even if there are various levels or gradients for what each “tier” of countries was expected to do.”

Singapore set out the three criteria it feels countries emissions targets should be determined by – context, constraints and contributions.

This tiny nation is a unique example. It’s widely regarded as a state that is investing in green technologies and energy efficiency, making the most out of a tiny area of land for its five million residents.

Yet it also has a high rating for per-capita emissions, and WWF recently rated it was being the 12th worst country in the world for its ‘ecological footprint’.

In Bangkok Singapore proposed emissions targets should be based on considerations including the socio-economic, political and geographical context of a country.

Other factors that need to be taken into account include the political, financial and geographical constraints a state faces, and the contributions made both domestically and internationally to the climate process. 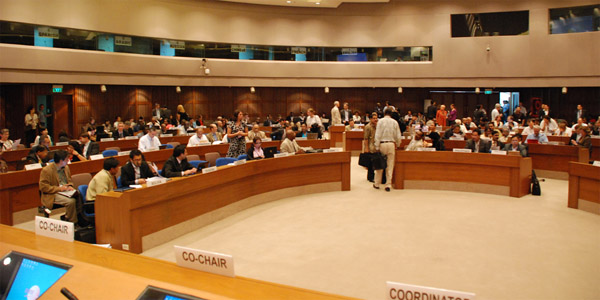 Countries set out their vision for the Durban Platform and how it can incorporate all countries (Source: UNFCCC/flickr)

USA negotiator Johnathan Pershing suggested that a “flexible” and “dynamic” approach rather than one that stresses the legally binding nature of talks is vital.

Micronesia and the US also stressed the value of taking place outside of the negotiations such as those focusing on HFCs, black carbon and methane (check our Climate Change A-Z for more information on these)

South Korea argues that emission target expectations for individual countries should account for the renewable energy potential of countries, population size, and how much coastline a country has.

Ecuador proposed that an emissions reduction compliance mechanism be linked to the International Court of Justice.

And Columbia suggested the climate change discussions be framed in the broader context of the UN Security Council agenda.

“Countries are starting to have quite profound discussions around what a nature of an agreement should look like and parties are starting to get a better understanding of where each other are at,” Liz Gallagher from E3G, who’s in Bangkok, told me.

“They are not coming to any conclusions but it is a good first go at getting a better understanding of what parties think they can deliver.”

While there are still so many outstanding issues in the other tracks of the negotiations, however, a vision for the ADP is likely to remain vague for some time.

Many countries, including Brazil, called for the LCA and Kyoto Protocol to be the focus of COP18 in Doha.

Brazil says it fears the ADP could become the dumping ground for discussions not completed under the other tracks.

In stocktaking meeting LCA Chair calls for more progress over the next 3 days.#UNFCCC

While we are beginning to see the vision begin to take shape on how the Durban Platform might look, the ideas remain rough and are likely to do so until the outstanding issues from other negotiations are resolved.

Observers have told RTCC discussions on the Durban Platform may not make true headway until 2013.