She told him the rising waters had destroyed her home. Apparently Romney sympathised, then advised her to call 211, a public service helpline in some US states.

Romney’s tip – reported in the Huffington Post on Saturday – did not seem to anger the woman, who’s called Jodie Chiarello. 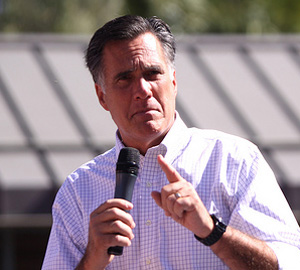 Chiarello’s anger was directed at the Federal government – and the fact that more levees (flood defences) had not been built to protect her town against the floods.

The day before they met, Mitt Romney had accepted the Republican nomination for President, with a speech that poked fun at the current incumbent’s efforts (albeit fairly limited) to combat climate change.

“President Obama promised to begin to slow the rise of the oceans and heal the planet. MY promise…is to help you and your family,” Romney said.

The message was simple. Obama should spend less time playing King Canute, trying to hold back the sea, and more focusing on an economy that is sinking fast.

In one sense Romney’s bang on. The US economy is in the dumps, and focusing on any other issue during an election campaign is simply crackers. If you can’t make ends meet now, why care what might happen in 2050?

But in another sense he is way off target. If all the increasing weight of evidence gathered by leading scientific institutions around the world is correct (NASA, NOAA, UK Met Office, USGS) then such short-term thinking could be catastrophic.

Ignore the climate issue, and long term the US and the world are likely to suffer badly.

Sir Nicholas Stern’s 2006 report for the British Government warned climate change could shrink the world economy by 20%. Bjorn Lomborg is right to say policy by panic tactics rarely work, but nor does bulldozering the facts.

Scientists predict that climate change will make extreme weather events more common and unpredictable – and are already explaining how a warming world can increase the chances of floods, droughts and other ‘natural’ disasters.

We don’t know if Hurricane Isaac was caused or affected by climate change. But we do know that extreme weather creates havoc with the economy and people’s lives.

In Mississippi as much as 18 inches of rain have fallen over the weekend, and over 900,000 homes are without power. Coffins are floating down streets, and Bloomberg estimates this latest Hurricane may cost insurers $2 billion.

The past decade has seen extreme droughts in Australia, Russia, Africa, Australia and Texas. NASA – which was praised by Romney for putting a man on the moon – reports that summer ice at the Arctic is at its lowest since records began.

Losses from extreme weather events in 2011 are estimated to have cost approximately $150 billion – which begs the question, how can ignoring climate change be part of any credible medium to long term economic strategy?

A year ago I interviewed UNFCCC chief Christiana Figueres and asked her about the Republican Party’s attitude to climate change. “Sooner or later they will catch up with physics'” she said.

In August 2012 the physics caught up with the Republicans at Romney’s inauguration, as Hurricane Isaac caused their National Convention to start a day late.

That alone won’t be enough to convince those who doubt the cause of climate change – perhaps little will.

But it would be reassuring to think that a man who could run the world’s most powerful country in over three months is open to reason, scientific facts and has a plan – other than advising us all to dial 211.