Climate finance should be given a bigger chunk of the agenda at the Doha climate negotiations to prevent five years of work being rendered meaningless, a leading NGO has said.

The Climate Action Network (CAN) said in its most recent update from the UN talks in Bangkok that without addressing a number of issues on climate funding at the COP18 summit in Doha this November, the end product would be an “empty shell”. 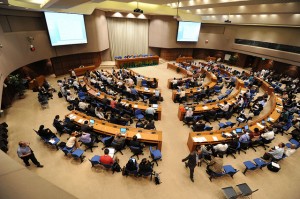 The Bangkok talks are seeking to lay foundations for the Doha summit but their are concerns that finance is being swept under the carpet. (Source: Flickr/UNFCCC)

The Long-term Cooperative Action (LCA) stream of the talks has conducted some work on finance, which developed countries in Bangkok are now claiming is complete. They want the LCA’s work transported to the new Durban Platform (ADP).

The LCA was adopted in 2007 at COP13 as part of the Bali Action Plan of focuses on a number of areas absent from 1997 Kyoto Protocol.

As the name suggests the LCA’s aim is to develop a long-term strategy for reducing global Greenhouse Gas Emissions, culminating in what it refers to as an ‘agreed outcome’.

“Having created the Work Programme on Long Term Finance, and mandated it to report directly to the COP in Doha, developed countries in the LCA are now claiming mission accomplished,” says CAN.

“That is clearly not the case. Right now, there is little confidence that scaling up climate finance will be given the attention it so desperately deserves.”

The current climate finance deal, so-called Fast Start Finance, expires at the end of 2012 and the Green Climate Fund, its long term successor, is unlikely to be operational before 2014.

There are no pledges on the table to fill this gap.

CAN has identified a number of unresolved issues that must be targeted in Doha to ensure the climate finance framework can support the most vulnerable countries as they look to adapt to and mitigate for climate change.

CAN wants the Doha talks to double the levels of Fast Start Finance for 2013 until at least 2015 with guarantees that the money is not simply redirected aid from other department’s budgets, it must be new and additional.

It wants commitments during the flagship UN climate change summit for $10-15bn of initial funding to kickstart the Green Climate Fund.

It also wants confirmation of a permanent, high profile home for finance discussions in the UN process moving forward.

The calls coincided with a protest by Jubilee South- Asia Pacific Movement on Debt and Development (JS-APMDD).

Lidy Nacpil, JS-APMDD coordinator, said that developing nations were owed “reparation” from big emitters for using more than their share of the atmosphere’s capacity for safe CO2 levels.

“The mobilization of unprecedented levels of finance is needed to enable people, communities and nations to deal with present and as well as already unavoidable future impacts of climate change, much of which are irreversible,” said Nacpil.

“The delay in mobilization of climate finance imperils the people of vulnerable countries,” she added.