By Tierney Smith and John Parnell

The weekend sessions of the Bangkok climate talks were dominated by impassioned pleas for support from some of the world’s more vulnerable nations and contrasting attempts to loosen commitments and reduce ambition from some developed nations. 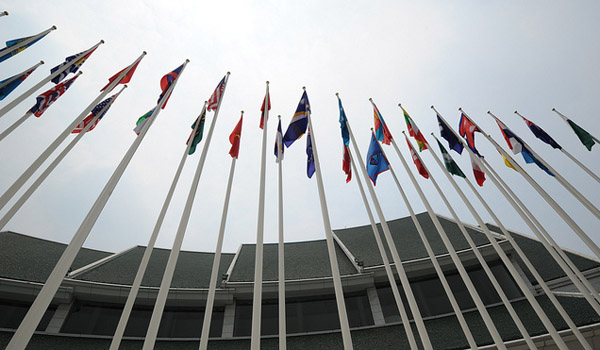 Unity has been lacking among the nations attending the UN climate talks in Bangkok. (Source: UNFCCC/Flickr)

The EU signalled that it would be unlikely to raise its existing emissions reduction target for 2020 from 20% to 30% or even the mooted compromise level of 25%. It instead said it would turn its attention to a 2030 target.

The US and New Zealand meanwhile, the latter being previously tipped to sign up for the second commitment period of greenhouse gas cuts under the Kyoto Protocol, issued their own worrying news.

They have suggested that accounting rules, which are designed to guarantee the veracity of a nation’s emissions reduction, be adjusted.

NGOs responded by saying this was an attempt to limit the actual work required to meet any future binding targets.

US and NZ calling for flexibility in emissions accounting. Surely it’s not a ruse to hide their lack of domestic mitigation action #UNFCCC

Least developed countries sought to highlight the need for more not less ambition through the UN climate change process.

Small Island State Barbados, one of many at risk from rising sea levels and increasing storm frequency and intensity, called not only for stronger pledges but also a heightened sense of urgency.

Bolivia chastised the low participation levels in the Kyoto Protocol’s second coming, expected to start in 2013.

Brazil questioned the motives of rich countries (so-called Annex I) that have walked away from Kyoto Protocol so far.

Brazil: “No Annex I country decides to leave the Kyoto Protocol to do more”. FACT. #unfccc #ohcanada #cmonaussiecmon

The tone from the previous UNFCCC negotiation in Bonn in May was described as “nasty” and there are signs that the latest talks have begun to hit similar obstacles.

One negotiator told the IISD that it had been hoped to begin forming text that could be used as the basis for the ministerial level climate summit in Doha this November. This, the delegate said, was proving impossible.

The talks continue until Wednesday September 5.