There were few surprises during the first day of UN climate change negotiations in Bangkok as countries largely stuck to established positions.

Nations’ reiterated their stance on a second commitment period of greenhouse gas cuts for developed economies through the Kyoto Protocol and continued early talks on its replacement, the Durban Platform (DP). 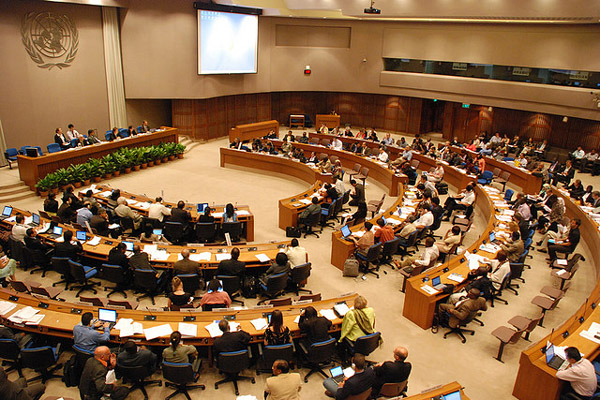 The informal meetings in Bangkok will attempt to clear the path for substantive progress at COP18 summit in Doha this November. (Source: Flickr/UNFCCC)

The EU, UK and other developed nations want an eight-year commitment period with a review in the middle to assess the appropriateness of the targeted reductions. The Alliance of Small Island States (AOSIS), the African group and the Least Developed Countries (LDCs) all want a five year period followed by a three year period of increased ambition afterwards.

The DP would include every country rather than just wealthy ones, with a 2020 start date agreed at last years Conference of the Parties (COP) in South Africa.

The UNFCCC’s informal meeting is designed to further debate ahead of the COP meeting in Doha this November.

“The Durban Platform chair organised some small roundtables purely to exchange views,” an observer to the talks told RTCC. “This is not about adding to or deleting existing texts. The meetings are fairly intimate and the number of observers sitting in on each one has been limited.”

Another track of the negotiations process on Long-term Cooperative Action (LCA) has taken a central role as expected. The LCA covers a variety of issues from finance to ensuring that past promises to increase support for nations adapting to climate change are kept.

“The developing countries have come together to make sure that commitments that have already been made are adhered too,” the observer told us.

Argentina’s representative told delegates that the DP should not be used to allow wealthy countries to “jump ship” from their legally binding commitments.

One developing country delegate told the IISD that: “New treaties are a promise, not a fact. We can’t expect others to jump off a plane without a parachute, with only promises of parachute delivery on the way down,” referring to the still theoretical nature of the DP’s legal status.

Efforts to finalise the LCA, already more than a year overdue, will continue as well as work on the form of a second Kyoto Protocol period, in Bangkok. Delegates will also attempt to bury those issues and remove the barriers to meaningful progress on a new globally inclusive deal for 2020.