As expected, the negotiations on Long Term Cooperative Action (LCA) have become a contentious topic in the first two days of the UNFCCC talks in Bangkok.

Formed in 2007 at COP13 in Bali, the LCA track of negotiations came out of the Bali Action Plan and covers many of the issues which were not covered under the Kyoto Protocol.

This includes topics such as mitigation pledges by both developed and developing countries, adaptation and possibly most crucially for developing nations, finance. 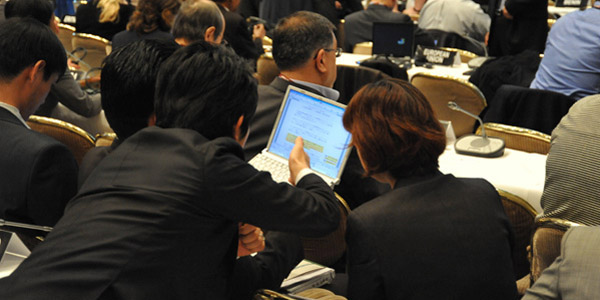 The divide widens between developed and developing nations as they battle it out to decide the future of the LCA (Source: UNFCCC)

At Durban last December, it was agreed the stream of negotiations would be extended, ready to be wrapped up in Doha at COP18 at the end of this year, but there is still a heated debate on how this should happen and if it should happen at all.

There are several options for the LCA.

Firstly the negotiations track could be wrapped up this year completely. Or if there are still aspects which have not been concluded these could be absorbed into the ongoing negotiations under the UNFCCC’s newest negotiations stream on the Durban Platform.

“The developed countries seem quite happy to conclude all the work of the LCA and simply say that it has finished and push talks into the Durban Platform at Doha or simply conclude them and sit on the institutional mechanisms that have already been created,” said Chris Wright from Adopt a Negotiator who is attending the talks.

“They seem to think that when it comes to finance, they have created the appropriate mechanisms; they’ve got the standing committees and they can deal with them now and there’s no need to keep talking.”

Many developing nations however, believe that the LCA still has important work to do and should not be concluded prematurely.

“In particular the G77 have really created a backlash,” says Wright. “They are saying that what they have created has not yet been implemented, isn’t clear enough and there is still a lot of work that needs to be done.

“They are not happy for it just to be concluded and abandoned or dumped in the Durban Platform because they don’t think there is anything they could implement there.”

While some parties feel the work under the LCA could move across the Durban Platform (ADP) negotiations, over the past two days, developing countries have warned that the Durban Platform relies on the successful conclusion of both the LCA and KP discussions.

Speaking in an informal meeting for the Durban Platform, negotiators from Argentina and Egypt both stressed successful conclusion to the KP and LCA talks would be a precondition for the ADP to proceed.

A negotiator from Nicaragua also warned that the new negotiations should not detract from the work that has taken place during the last five years.

Many worry that moving discussions into their new track will further hold up vital work, and delay action until at least 2015 if not 2020.

LCA must provide means of implementation (financing, etc) for the Adaptation framework. Otherwise 2yrs of work would be for naught #UNFCCC

In their opening statement ahead of the talks, the Least Developed Countries (LDCs) said it was important governments kept the promises they have already made to provide finance, technology and capacity building.

They added that it was vital developing countries received support to adapt to the climate change they were already experiencing.

“The Bali Action Plan is fundamental in protecting the interest of the LDCs – right here and right now, and not in ten year’s time,” said Pa Ousman Jargu, the LDCs group chair from Gambia. “Our attitude towards it reflects our attitude towards a future agreement. Two years of dialogue followed by five years of negotiation with interim key decisions in Cancun and Durban cannot just be ignored as if they never happened.”