Australia was a late comer to the Kyoto Protocol, ratifying the international agreement on greenhouse gas emission reductions in 2005. The fears that this may never translate into an actual period of emission cuts are now disappearing.

A second period of Kyoto (KP2) commitments is on the table at the UN’s climate change negotiations which reconvene in Bangkok this week. 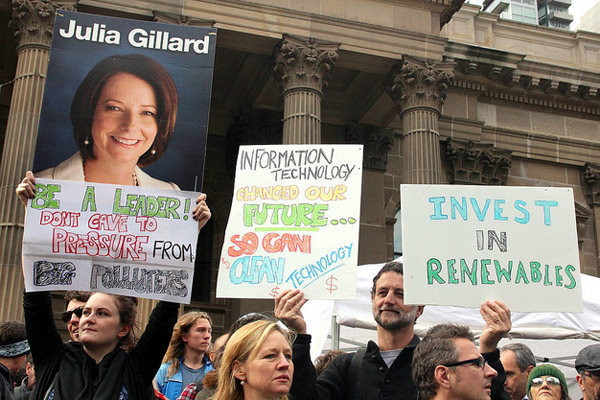 Australians are highly engaged with energy and climate change issues with the carbon tax near the top of the political agenda for several years. (Source: Flickr/Takver)

Canada controversially withdrew in Durban and it remains highly unlikely that Russia, the US or Japan will join in.

The past two weeks have seen a change in tone from Australia however and a bit of good news could be just what the international process needs after the last round of talks in Bonn left many with a bad taste in their mouth.

The Australian opposition has said that it would not be opposed to joining a second commitment period leaving the government free to sign-up without persecution.

“The move by the opposition sends a clear signal to the Australian public and the international community that they are committed and willing to be bound internationally to achieving at least the country’s minimum target of 5% [below 2000 levels],” says Will McGoldrick, climate change policy manager at WWF-Australia.

“The opposition move means the government has a little more room to move politically on Kyoto and it put the spotlight back on them. Any perception that they felt constrained to move on Kyoto because of opposition to the carbon price has now been removed,” adds McGoldrick.

The country has spent much of the past five years embroiled in political wrangling with leadership challenges in the government and bitter arguments over the carbon price.

News this week that the country was merging its domestic carbon trading with the EU has also created speculation the bold move is in preparation for binding cuts.

Such a promise makes big emitters more active in the carbon market, regardless of whether they are selling excess allowances that result from their own carbon cuts or are buying extra allowances owing to their failure to meet targets.

The country’s vast mining industry will be one of the heaviest hit by the policy. The opposition coalition has also been critical saying it challenges the country’s competitiveness and leaves industry disillusioned.

“They feel that there’s a distinction to be made between Australia’s international obligations and the carbon price. They campaigned hard against that but they wanted to send a signal that they would still be looking at other policies to help the country meet international obligations,” says McGoldrick shedding light on a refreshingly sensible approach whereby the opposition has found a way to stay true to its ideals without ignoring the science on climate change.

The news on the EU emissions trading link-up also points to a shift in policy.

The government dropped the carbon floor price from its policy, a move which has irked environmentalists and adopted a scheme which market analyst Dr Stephen Knell of IHS CERA in London says is significant.

“This provides some substantiation to future pledges that we might get from Australia. The Europeans would require a clear idea of the volume of cuts the Australians would be making and they’d have to put that in writing. It will show us where the political currents are taking the country,” he says.

The depth of an Australian pledge would determine how many carbon allowances they would be likely to trade.

While Knell says there are cheaper international carbon credits that Australian firms could use to offset their activities, the news remains significant and could well be a nod to an increase in ambition from Australia manifested within a Kyoto pledge.

So how ambitious could they be?

“There is bipartisan support for Australia’s full target range of 5-25% and the [opposition] coalition has not walked away from that but they do emphasise the 5%,” says WWF’s McGoldrick.

“We’d like to see both sides put more emphasis on the 25% end of the range but given the tough debate that took place around the carbon price, it’s encouraging to see any bi-partisanship around targets,” says McGoldrick.

That sense of bipartisanship could go a long way to build bridges between the UN climate change talks’ 195 parties.

The addition of Australia, and any other nations, to a potential second Kyoto period cannot be understated.

The future of a global deal on emissions that includes all nations from 2020, hinges on the emergence of a second Kyoto period as much as a sign of good faith from rich countries as a trial run for what would be a larger, more complex deal.

Australia’s recent burst of cooperation and ambition, could turn the climate change talks upside down.